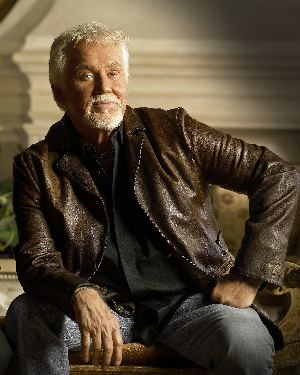 'ALABAMA & Friends' - the new tribute album honoring country music's most iconic group ALABAMA - is now available for digital pre-orders through iTunes. Fans can access the pre-ordering of the album before it hits the streets on Tuesday, August 27 by visiting Itunes.

Special bundle packages are available now via the group's official website www.thealabamaband.com. The "Ultimate Bundle" package consists of a vintage ALABAMA baseball tee, an 'ALABAMA & Friends' CD and vinyl LP for $50.00. A vintage tee and CD package is also available for only $35.00. Orders are expected to arrive on album release day or soon after.

'ALABAMA & Friends' features some of country music's hottest stars delivering their own unique versions of ALABAMA classics, including Jason Aldean ("Tennessee River"), Luke Bryan ("Love in the First Degree"), Kenny Chesney ("Lady Down on Love"), Eli Young Band ("The Closer You Get"), Florida Georgia Line ("I'm in a Hurry (And Don't Know Why)"), Jamey Johnson ("My Home's in Alabama"), Toby Keith ("She and I"), Rascal Flatts ("Old Flame") and Trisha Yearwood ("Forever's As Far As I'll Go").

The 11-song collection will also feature two new songs from ALABAMA - "That's How I Was Raised" and "All American." It's the first taste of new music from the legendary and award-winning group in over a decade.

After signing with RCA in 1980, ALABAMA soared to the top time and again with 21 No. 1 hits in a row. They have had 43 chart-topping singles and have sold more than 73 million albums worldwide. They have won more than 150 major industry nods, including two Grammys, the Minnie Pearl Humanitarian award, Entertainer of the Year awards three times from the CMA and five times from the ACM, as well as the ACM Artist of the Decade award. The Hall of Famers have earned 21 Gold ®, Platinum ® and Multi-Platinum ® albums, and were named the RIAA's Country Group of the Century.

ALABAMA is currently in the midst of their Back to the Bowery Tour that has them playing to capacity crowds all across the country since its launch earlier this year. The new tour will continue through the fall, making stops in cities including Detroit, MI, Greenville, SC, St. Louis, MO, Nashville, TN and Birmingham, AL.

Don't forget to enter our contest to win an ALABAMA & Friends poster along with a vintage ALABAMA baseball tee - It ends tomorrow 8/23 and you can enter on Nashville Love's Facebook and Twitter pages by sharing the associated post or re-tweeting!!

For more news and a complete listing of tour dates visit www.thealabamaband.com. 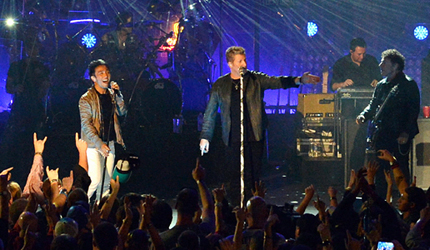 In case you missed the latest CMT Crossroads: Journey and Rascal Flatts Live From Super Bowl XLVII, no worries.  You can watch teh full episode here on CMT.com.  Full episodes of the entire Crossroads series are available on the site for viewing. 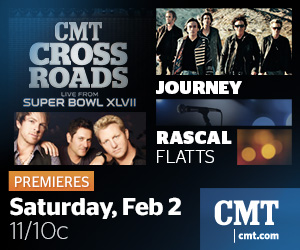 In the New Orleans, LA area area and want to see the show? Fans can register to be a part of the CMT Crossroads show as NFL Insiders Here. Doors will open at 7 p.m. for all confirmed show attendees.

Rascal Flatts wrapped touring in December of 2012 having played before 1 million fans and hitting a new career milestone with over 7 million concert tickets sold.

Rascal Flatts is the best-selling country vocal group of the past decade and with the #1 debut of their latest album, CHANGED, they have the distinction of being one of only four acts to have seven consecutive studio albums debut in the top spot on the Billboard Country Albums chart during the Soundscan era. Since their musical debut in 2000, the band has sold over 21 million albums, 25 million digital downloads and delivered 14 #1 singles to the top of the charts. Rascal Flatts is the most awarded Country group of the past decade, earning over 40 trophies from the ACAs, ACMs, AMAs, CMAs, People's Choice Awards and more.

Live Nation is the national tour promoter. Log on to www.rascalflatts.com or www.livenation.com  for tour dates and information