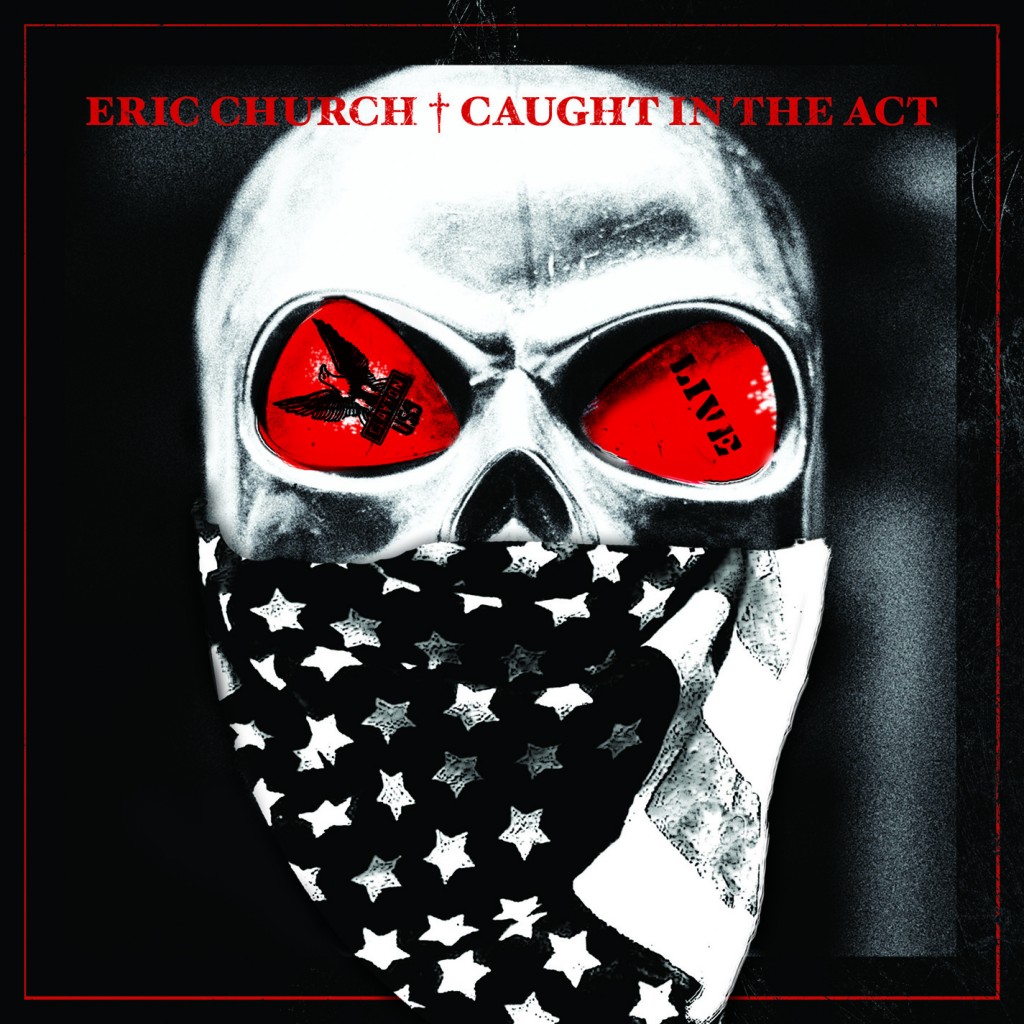 Multi Award-winning superstar Eric Church is not only celebrating winning the coveted Album of The Year award (CHIEF) and Vocal Event Of The Year award (“The Only Way I Know,” J. Aldean, L. Bryan, E. Church) during Sunday night’s 48th Annual Academy of Country Music (ACM) Awards show, but also the release of his first live album to stores nationwide and digital retailers now. Caught In The Act: Live, a 17-track live concert recorded over the course of two nights at Chattanooga’s Tivoli Theatre in October 2012 features songs from Sinners Like Me, Carolina and his award-winning 2011 release, CHIEF. A double gatefold vinyl version of the record will be made available on National Record Store Day, Saturday, April 20. The package will include four additional tracks and a special whiskey-infused 7-inch.

The release of Caught In The Act: Live is fans’ first chance to take home a copy of Church’s live show - the only of the country genre to be named "Best Concerts Of 2012" by The New York Times who calls it, “a mean show,” and adds, “Mr. Church has clawed his way into the country mainstream with a series of post-outlaw anthems, and delivered them with verve and tension.” AP praises, "Church constantly encourages his rowdy audience, exhorting them to bellow the chorus of 'Drink in My Hand' and 'Jack Daniels.' Even when he plays a solo acoustic version of 'Sinners Like Me,' he tells everyone, 'It's just going to be us, so sing loud.'"

The Salt Lake Tribune writes, “With sterling musicianship, a voice with the right balance of grit and twang, and songs of conviction that shine with improvisation ('Springsteen,' for one, opens with an elegiac piano and ends with an echo of 'Born to Run'), this live album is alive.”

View EPK footage from the recording of Caught In The Act: Live here.

Earning recognition from Pollstar in 2012 as one of the highest-attended tours, Church sold nearly a million tickets on his first-ever headlining tour, The Blood, Sweat & Beers Tour. Fans can catch him performing select dates on Kenny Chesney's No Shoes Nation tour, and he will continue The Blood, Sweat and Beers Tour this summer through fall which will include a stop at Lollapalooza on August 2 in Chicago.

For a full list of tour dates and more information on Eric Church, please visit www.ericchurch.com. 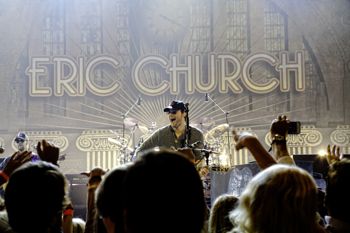 EMI Records' Eric Church will release a 17-track live album, 'Caught In The Act: Live', on Tuesday, April 9, 2013 featuring songs from 'Sinners Like Me', 'Carolina', and his CMA Award-winning 2011 release, 'CHIEF'.  Act will be available for purchase on iTunes and in stores nationwide. The album was recorded at Chattanooga's Tivoli Theatre in October 2012 and is Church’s first live recording.

A double gatefold vinyl version of the record will also be made available on National Record Store Day, Saturday, April 20. The package will include four additional tracks and a special whiskey-infused 7-inch.

'Caught In The Act: Live' features raw, electric performances of songs like “Pledge Allegiance To The Hag,” “Smoke A Little Smoke,” “How ‘Bout You,” “Creepin’” and more.  American Songwriter noted of the live taping, “[The] rendition of the soulful hit ‘Springsteen’ is one of his best, slipping into the first verse of Springsteen’s ‘Born to Run’ towards to end.” The writer adds, “[Church] sang and played just differently enough to create variety from his studio versions and his performance confirmed that his voice is easily just as good as how it sounds on a produced record.”

The release of 'Caught In The Act: Live' is fans’ first chance to take home a copy of Church’s live show -- the only of the country genre to be named "Best Concerts Of 2012" by The New York Times who calls it, “A mean show,” and adds, “Mr. Church has clawed his way into the country mainstream with a series of post-outlaw anthems, and delivered them with verve and tension, as if he might not be allowed to for much longer.”

Church is nominated for two GRAMMY® awards this year, both for his No. 1 smash hit, "Springsteen," in categories Best Country Solo Performance and Best Country Song and will be in attendance when the winners are announced this Sunday, February 10. He is currently touring Canada on his sold-out The Blood Sweat & Beers Tour and will return to the states to join Kenny Chesney on the No Shoes Nation tour beginning March 16 in Tampa, Fla.

For a full list of tour dates and more information on Eric Church, visit www.ericchurch.com.

“People from all over the world recognize that Nashville is not only Music City, but the epicenter of the songwriting community,” Troy Tomlinson, President and CEO, Sony/ATV Music Publishing Nashville, said. “CMA celebrates this important membership group. The presentation of the Triple Play Awards is just another example of CMA’s commitment to honoring the creators of song.”

“Nashville is legendary for its songwriters and CMA is proud to recognize this important segment of our industry,” Steve Moore, CMA Chief Executive Officer, said. “It is an honor to present these songwriters and songwriting artists with the Triple Play Award and acknowledge this incredible accomplishment and their significant contributions to our format.”

“Considering my love for Country Music and my lifelong dream to have songs on the radio, I am blown away by the idea that I would have a No. 1 at all, much less three in one year,” said Shane McAnally.

“I’m so grateful to be a part of the Nashville family,” Eric Paslay said of receiving the honor. “One of my biggest dreams was to have a song on Country radio. Getting a No. 1 was sugar on top. Being honored by the CMA with a Triple Play Award has made 2012 the sweetest year of my life so far!”

Rodney Clawson: “Drink On It,” “Drunk On You,”“Take A Little Ride”

Brantley Gilbert: “Dirt Road Anthem,” “Country Must Be Country Wide” “You Don’t Know Her Like I Do”

Ben Hayslip: “Honey Bee,” “I Don’t Want This Night To End,” “I’m Gonna Love You Through It”

Dave Haywood: “Just A Kiss,” “We Owned The Night,” “Dancin’ Away With My Heart”

Charles Kelley: “Just A Kiss,” “We Owned The Night.” “Dancin’ Away With My Heart”

Shane McAnally: “Alone With You,” “Come Over,” “Kiss Tomorrow Goodbye”

Neil Thrasher: “Tattoos On This Town,” “Banjo,” “Fly Over States”

Five-time Grammy winner and current Grammy-nominee Carrie Underwood wrapped her critically acclaimed “Blown Away Tour” on Dec. 22 having performed many sell-out shows in 62 cities across the United States, Canada, the UK, and Australia. Underwood was the top female country touring artist for 2012 according to Pollstar’s Year-End chart.

“The Blown Away Tour” will re-launch with a second leg of arenas on February 13, 2013 in Colorado Springs with Hunter Hayes continuing as special guest on the majority of the US and Canada shows. The tour will travel throughout America, Canada, and across the pond to the UK and Ireland. The North American dates on “The Blown Away Tour” are presented and hydrated by vitaminwater®.

The donation of $1 from each ticket sold on the North American leg of “The Blown Away Tour” will continue in 2013 to support Red Cross disaster relief. Every year, the American Red Cross prepares for and responds to nearly 70,000 disasters across the United States. This donation will help the Red Cross provide shelter, food, and emotional support for those in need after a disaster. Proceeds from her Canadian concerts will be donated to the Canadian Red Cross. In 2012, Underwood also donated additional proceeds from her Atlantic City and Des Moines shows to local charities.

Please visit www.carrieunderwood.fm for up to date information on “The Blown Away Tour.”

In 2013, Church will release a live album and join Kenny Chesney for the stadium dates of his No Shoes Nation Tour, commencing March 16, 2013 in Tampa, Fla.