The video for “Highway Don’t Care” directed by Shane Drake, won Video of the Year.

Brad Paisley and Carrie Underwood will host the CMA Awards at Nashville’s Bridgestone Arena, beginning at 7 p.m. ET on ABC. 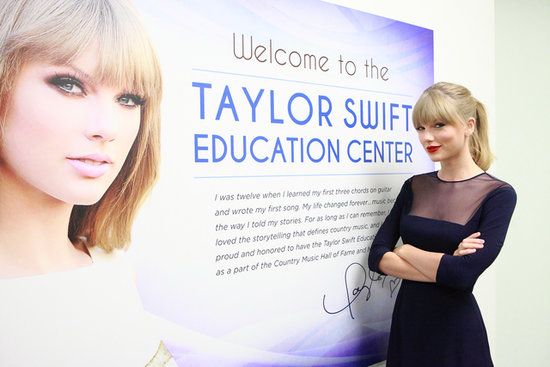 The state-of-the-art Taylor Swift Education Center opened this weekend at the Country Music Hall of Fame, thanks to an incredibly generous $4 million donation Taylor made to the Hall of Fame to fund the project, the largest individual artist gift in the museum’s history. Taylor says, “I really love that the fans have put me in a position where I feel like I can give back more, and also to raise awareness for things that need attention: write a song for this or show up for that or donate money for this.”

She’s especially proud of the new Education Center because she says, “That’s a place where so many people from out of town come to visit Nashville, that’s one of the first places they go. I want it to be beautiful and I want it to be really cool for kids to get to take field trips there and go visit.” Taylor didn’t know about the Country Music Hall of Fame when she was growing up. She says, “I learned all about country music through what I saw on TV and the research that I did, I didn’t really know that there was a museum you could go to see all of these legends -- I didn’t know that you could go to a place and see it all in person. It’s going to be amazing, I think, for kids to get to have a place where they can go and just learn as much as they possibly can.”

The Taylor Swift Education Center is housed on two floors in the museum and features three classrooms, a learning lab and a children’s exhibit gallery. Plus, Taylor has hinted that she would like to be involved in some of the future programs that will be offered at the center, so you never know when she may stop by.

Taylor Swift Awarded With NSAI Songwriter/Artist Of The Year Award 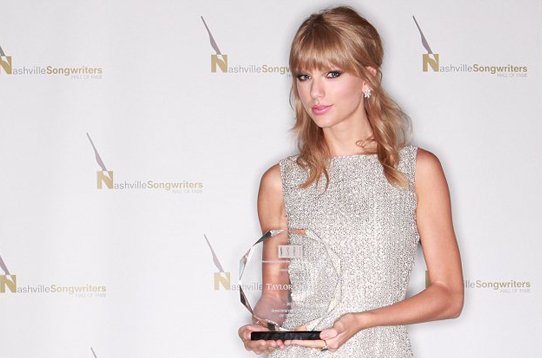 The Nashville Songwriters Association International (NSAI) awarded Taylor Swift with its Songwriter/Artist of the Year Award! Taylor has released 14 songs that have landed in the Top 30 between July 2012 and June 2013. This stands as Taylor's sixth award, officially giving her the record for most awards received by any artist. 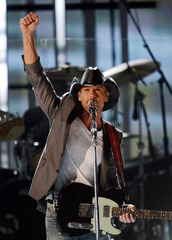 Award-winning entertainer Tim McGraw celebrated his latest No. one song in Nashville Aug. 20 for the multi-week hit "Highway Don't Care" with Taylor Swift, featuring Keith Urban on guitar. The monster collaboration is McGraw's 34th No. 1 song and second No. 1 from his Big Machine Records debut, TWO LANES OF FREEDOM. On hand for the celebration were songwriters Brett Warren, Brad Warren and Mark Irwin, Big Machine's Scott Borchetta, Keith Urban as well as a packed room of friends, industry and press.

During the party, a video was played for the crowd that offers a look at the evolution of the song, from an idea in the writers room to finding its place as one of the most important songs of the year. Interviews from the songwriters (including Josh Kear who was out of the country and unable to attend the festivities), Urban, Swift as well as industry leaders like Lon Helton were included who commented that McGraw "continues to deliver songs to country radio that are really more than No. one's, they're game changers. They move the needle." To view the video in its entirety, click here. 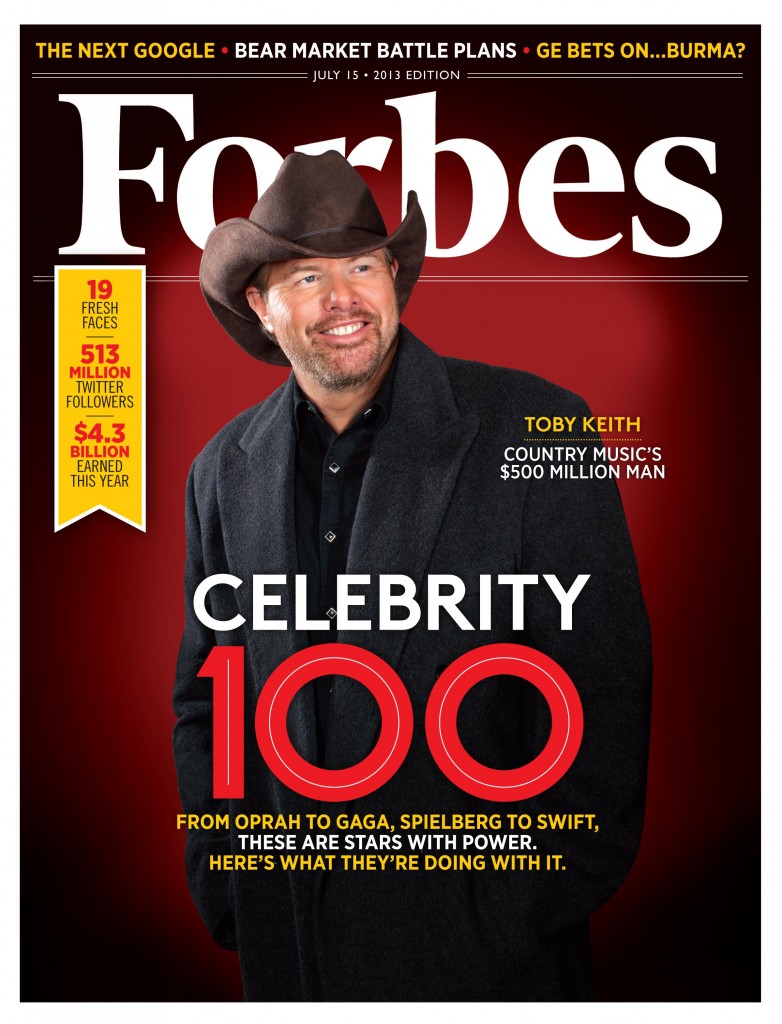 Billed as "Country's $500 Million Man," Toby Keith is on the cover of Forbes' Celebrity 100 issue. "The most vertically integrated performer in the music business" details his rise from oil rigs to the stage, departure from Universal, investment in Big Machine and other successful ventures, often providing dollar figures. Also in the issue, the celebrity power list finds Taylor Swift at No. 6, Keith at No. 43, Carrie Underwood at No. 46, Kenny Chesney at No. 47 and, at No. 1, Oprah Winfrey. Read the cover story here; see the Celebrity 100 here. 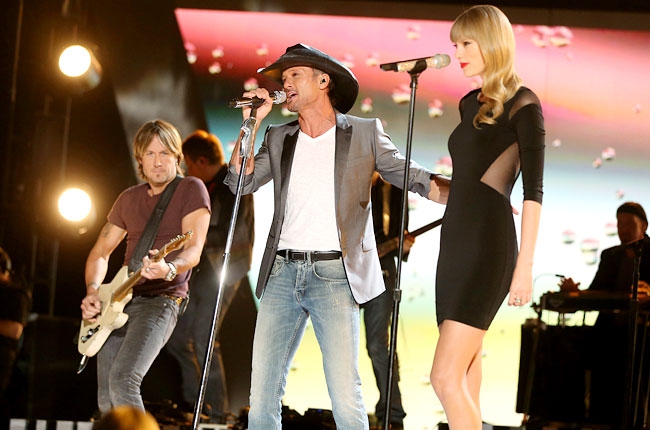 GRAMMY winning superstar Tim McGraw is at the top of the both the Billboard and Mediabase charts again this week for the smash hit, "Highway Don't Care" with Taylor Swift, featuring Keith Urban on guitar. In addition, the track has sold over one million downloads and set a record for single week audience impressions with 41.3 million during the May 27-June 2 Nielsen BDS tracking week, logging the biggest weekly audience sum since the Country Airplay chart switched to audience-based rankings in January 2005. The three superstars joined together for this monumental musical event which marks McGraw's 34th career No. one song and second consecutive No. one from his Big Machine Records debut TWO LANES OF FREEDOM.

"I thought this song had the potential to be really special the very first time I heard the demo," said McGraw. "And then standing on the stage with Taylor and Keith performing it live for the first time on the ACMs, I knew that it was really the kind of magical collaboration that only comes along every few years. The energy that night was undeniable…I know the three of us could feel it. Radio continues to be supportive and excited about the music we're giving them, and I'm so thankful for my friends there and for all the fans who have really taken this thing to the next level. It just keeps getting bigger and bigger in our show every night."

McGraw's latest No. one achievement comes on the heels of another sold-out weekend of his TWO LANES OF FREEDOM 2013 Tour, powered by Pennzoil, with capacity shows in Indianapolis, IN; Cleveland, OH and Washington, D.C. Previous stops on the 30 city trek have critics chiming in to praise McGraw's two hour action-packed set.

"The man sweats star power and has an effortless, sexy swagger that make it hard to believe he's a mere mortal, yet he performs with humility, smiling at the response from the crowd as if he's genuinely surprised they like him." Tampa Tribune

McGraw's TWO LANES OF FREEDOM debuted at No. one on the Billboard Country Albums chart marking his 14th career No. one debut. Since the release of his debut album in 1993, McGraw has sold over 40 million albums, won three GRAMMY’s, 15 ACM Awards, 12 CMA Awards and 10 AMA’s, while simultaneously maintaining a parallel career as a successful actor in such films as the Oscar nominated The Blind Side, Country Strong, and Friday Night Lights—as well as hosting Saturday Night Live, a rare honor for a singer in any genre. Nielsen-BDS recently certified McGraw as the most-played Country artist of the past 20 years (1992-2012) with more than 10 million spins detected and Mediabase recognized him as the most-played Country artist in the history of their tracking service. The TWO LANES OF FREEDOM 2013 Tour continues on this weekend with stops in San Diego, CA (6/7); San Bernadino, CA (6/8) and Mountain View, CA (6/9). 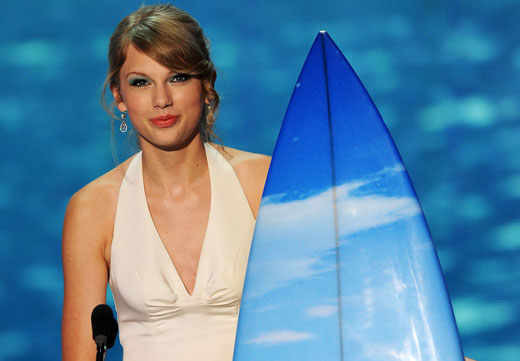 The accolades keep piling up for Taylor Swift. Fresh off of her eight wins at the Billboard Music Awards, she has earned three nominations at the upcoming Teen Choice awards. The Teen Choice awards will celebrate the most popular teen icons in television, music, film, fashion, sports and comedy during a two-hour event that airs Sunday, Aug. 11 on FOX. Voting is now open; fans ages 13-19 can vote once per day in each category for their favorite Teen Choice 2013 “Wave One” nominees by visiting www.teenchoiceawards.com.

Hosts, performers, presenters and additional nominees are yet to be announced.

In the music categories, Swift earned a nomination in the all-genre Choice Female Artist category, alongside Selena Gomez, Demi Lovato, Pink and Rihanna. Rock acts with Nashville ties–Paramore and The Lumineers–both earned nods in the Choice Rock Group category, along with AWOLNATION, Imagine Dragons and Mumford & Sons.

Taylor also scored a nomination in the category of Choice Smile. 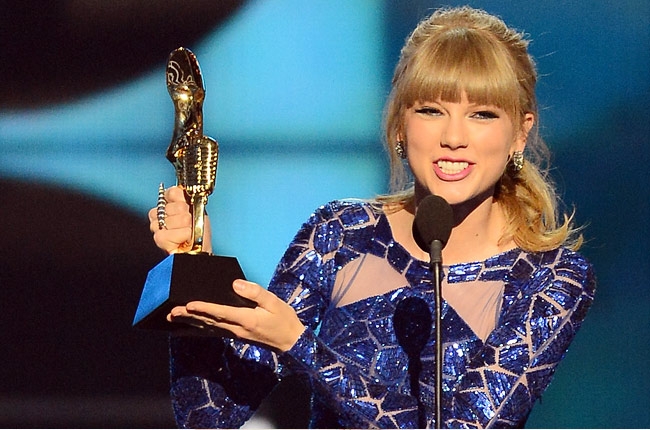 Swift was honored as Top Artist, Top Female Artist and Top Billboard 200 artist in ceremonies held at the MGM Grand in Las Vegas, where awards were handed out in 45 categories, 10 of them on the ABC telecast. Swift received the night’s top honor, Artist of the Year, as well as Top Female Artist, Top Country Artist and Top Digital Songs Artist. “Red” was Tops in the Billboard 200 and country albums categories; her “We Are Never Ever Getting Back Together” was named Top Country Song.

“Thank you for making my music the soundtrack to your crazy emotions,” Swift said in a thank you to fans after being named Artist of the Year. “You are the longest and best relationship I’ve had.” 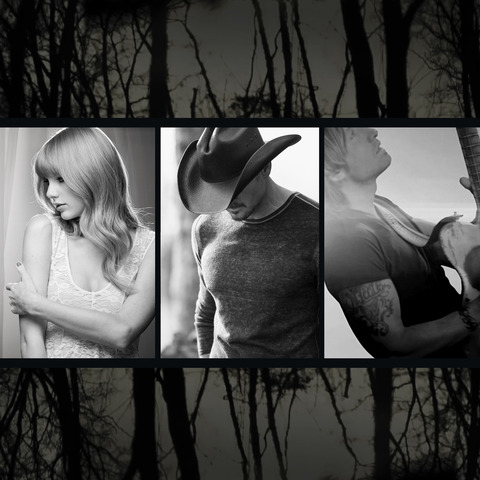 With Tim McGraw’s latest single featuring guest appearances by some of music’s hottest stars, Taylor Swift and Keith Urban, there was much to be expected from the “Highway Don’t Care” music video reveal, yesterday.

Directed by Shane Drake, the dramatic twist takes a completely different angle as some may have expected. It raises awareness for the dangers of distracted driving.

“The first impetus of this idea came from my daughter, who is 16-years-old and got her driver’s license today,” said McGraw. “We didn’t start out to turn it into a public service announcement, but as it developed and I started realizing that I have two teenage daughters, I didn’t mind being preachy.”

The event was broadcast live around the world from Nashville’s Belcourt Theater, as the first-ever music video debut via a Google+ hangout session.

Audience members included guests from Vanderbilt’s LifeFlight team featured in the video, in addition to industry, fans and students from Cookville High School who were honored for educating of the dangers of texting and driving.

McGraw hit the road this past weekend (April 2) with his Two Lanes of Freedom Tour, which is expected to run throughout the summer with Brantley Gilbert and Love and Theft. By the end of the tour, McGraw will have given away a customized 2013 Dodge Challenger SRT and will continue the HomeFront program, awarding mortgage-free homes to 31 veterans in need.

Check out the official video for "Highway Don't Care" here.