ACM's "All-Star Salute To The Troops" To Air May 20th 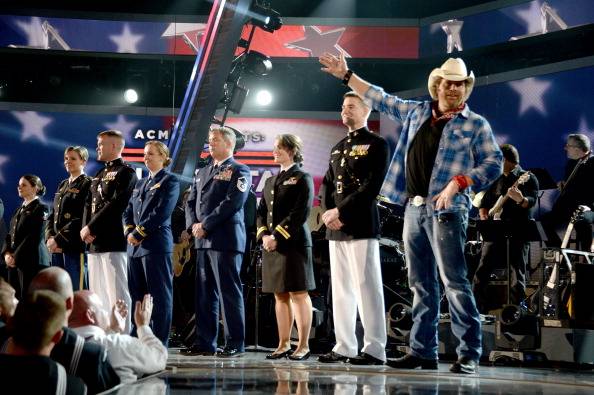 The Academy of Country Music and dick clark productions have announced additional information regarding the servicemen and women from the United States Armed Forces, who performed on stage with some of the biggest names in country music during ACM PRESENTS: AN ALL-STAR SALUTE TO THE TROOPS, taped on Monday, April 7th at the MGM Grand Garden Arena in Las Vegas. In honor of Armed Forces Day (May 17) observances, the two-hour concert event, co-hosted by LL COOL J and Chris O’Donnell, will air Tuesday, May 20, 2014 at 9:00 PM ET/PT on the CBS Television Network.

U.S. Air Force Chief of Staff General Mark Welsh was in attendance and thanked ACM, talented artists and all who give of themselves and their time to support the troops and their families.

During a special moment, superstar Toby Keith was surprised onstage by USO CEO, retired Brig. Gen. John Pray, who presented him with the Spirit of the USO honor in recognition of his many USO tours and longtime support of our U.S. military.

Entertainer of the Year: George Strait

Song of the Year: I Drive Your Truck, Lee Brice

Vocal Event of the Year: We Were Us, Keith Urban and Miranda Lambert

Blake Shelton will welcome fellow The Voice coach Shakira to the Academy of Country Music awards stage on Sunday, April 6th. The pair will perform “Medicine,” a track on Shakira’s album. Shakira penned “Medicine” with Hillary Lindsey and Mark Bright. Be sure to tune in Sunday night at 8 p.m. ET!

Fan voting is now open for the Academy of Country Music’s Entertainer of the Year award, which will be powered by Ram for the fifth year in a row, as well as for the ACM New Artist of the Year award, presented by Kohl’s. Votes can be cast now at www.voteACM.com.

Nominees for Entertainer of the Year include Luke Bryan, Miranda Lambert, Blake Shelton, George Strait and Taylor Swift. Nominees for the ACM New Artist of the Year presented by Kohls include Brett Eldredge, Justin Moore and Kip Moore.

The awards will be given out during the 49th Annual Academy of Country Music Awards, to be broadcast live from the MGM Grand Garden Arena in Las Vegas, Sunday, April 6, 2014 at 8 p.m., live ET/delayed PT on the CBS Television Network.

The Academy of Country Music and dick clark productions have announced ACM Presents: An All-Star Salute To The Troops, a concert event featuring some of the biggest names in Country music paying tribute to our armed forces, will be broadcast Tuesday, May 20 (9:00-11:00 PM, ET/PT) on the CBS Television Network. The special will be taped Monday, April 7 at the MGM Grand Garden Arena in Las Vegas.

Merle Haggard, George Strait, Carrie Underwood, Florida Georgia Line, Lady Antebellum and The Band Perry are the first artists to be added to the all-star lineup of performers for the event. The concert will honor the country’s remarkable servicemen and women and include special moments and stories of incredible bravery and integrity.

ACM Presents: An All-Star Salute To The Troops is produced for television by dick clark productions. Allen Shapiro, Mike Mahan and R.A. Clark are executive producers. Barry Adelman is producer. Bob Romeo is executive producer for the Academy of Country Music.

Tickets for ACM Presents: An All-Star Salute to the Troops are on sale now at Ticketmaster, priced at $105, $155 and $205. Proceeds from ticket sales of the event will benefit ACM Lifting Lives, the charitable arm of the Academy. For more information, visit www.ACMLiftingLives.org or www.ACMcountry.com.

Nominations for the 49th Annual Academy of Country Music Awards were announced on Wednesday, Jan. 29, with Tim McGraw and Miranda Lambert leading with seven nods each.

In the coveted Entertainer of the Year category, Lambert, Shelton and Swift will face Luke Bryan and George Strait.

Bryan, who is the reigning ACM Awards Entertainer of the Year, will join Shelton as cohost of this year's ACM Awards when they air live from the MGM Grand Garden Arena in Las Vegas on Sunday, April 6 on CBS.

Fans will help select the winner of both the Academy’s most prestigious honor, Entertainer of the Year, and the New Artist of the Year Presented By Kohl’s.

Produced for television by dick clark productions and will be broadcast LIVE from the MGM Grand Garden Arena in Las Vegas on Sunday, April 6, 2014 at 8:00 PM live ET on the CBS Television Network.

Entertainer of the Year

Male Vocalist of the Year

Female Vocalist of the Year

Vocal Duo of the Year

Vocal Group of the Year

Album of the Year

Based On a True Story - Blake Shelton

Single Record of the Year

Song of the Year

"Every Storm (Runs Out Of Rain)" - Gary Allan

"Mine Would Be You" - Blake Shelton

Video of the Year

Vocal Event of the Year

"We Were Us" - Keith Urban and Miranda Lambert

OFF CAMERA AWARDS - The following off-camera awards will be presented during the 8th Annual ACM Honors event on Tuesday, September 9, 2014 in Nashville.

Songwriter of the Year

Bass Player of the Year

Drummer of the Year

Guitar Player of the Year

Piano/Keyboards Player of the Year

Specialty Instrument(s) Player of the Year

Steel Guitar Player of the Year

Audio Engineer of the Year

Producer of the Year

Alabama Forever was founded in response to the tornadoes that ravaged Alabama in April 2011. Their core purpose is to help Alabama communities in need by offering viable resolutions to maintain the best possible life for their citizens.

Watch the January “My Cause” video and donate here. 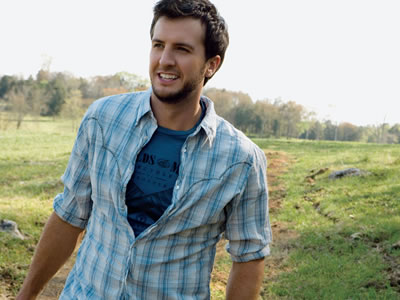 The list of winners from the 2013 Academy of Country Music Awards, April 7:

Entertainer of the Year

ALBUM OF THE YEAR (for artist, producer and record company)

SINGLE OF THE YEAR (goes to artist, producer and record company)

SONG OF THE YEAR (for composers, publishers, artist)

VIDEO (for producer, director and artist)

Fan voting for Entertainer of the Year and New Artist of the Year is now open for the 48th Annual Academy of Country Music awards. Fans can vote at www.voteACM.com.

The awards will be given out during the 48th Annual Academy of Country Music Awards, to be broadcast live from the MGM Grand Garden Arena in Las Vegas on Sunday, April 7, beginning at 8 p.m. ET on the CBS Television Network.

Entertainer of the Year voting (powered by the Ram Truck Brand) will give fans the opportunity to vote for the Academy’s top honor. Nominees include Jason Aldean, Luke Bryan, Miranda Lambert, Blake Shelton and Taylor Swift. ACM New Artist of the Year presented by Kohls nominees include Brantley Gilbert, Jana Kramer and Florida Georgia Line.

The Academy of Country Music and dick clark productions announced March 20 that George Strait and Garth Brooks, the two most recent ACM Artist of the Decade Award recipients, will perform together for the first time in history to pay tribute to Dick Clark at the 48th ANNUAL ACADEMY OF COUNTRY MUSIC AWARDS, to be broadcast live from the MGM Grand Garden Arena in Las Vegas Sunday, April 7 (8:00 PM-11:00 PM, live ET/delayed PT) on the CBS Television Network. The ACM Artist of the Decade Award will be renamed the ACM Dick Clark Artist of the Decade Award, in honor of the iconic figure and longtime producer of the ACADEMY OF COUNTRY MUSIC AWARDS. The ceremony, to be co-hosted by Luke Bryan and Blake Shelton, honors country music’s top talent, as well as the industry’s hottest emerging artists.

Dick Clark, who passed away last year, began producing the Academy of Country Music Awards in 1979 and helped introduce audiences all over America to the most talented artists in country music. Clark had long been an ambassador for a wide-range of musical genres and with his guidance, ushered the Academy of Country Music Awards through the decades to become one of the industry’s biggest events.

“Dick helped make country music accessible to a larger fan base and his efforts will not be forgotten. Garth and I were so grateful when we each received the ACM Artist of the Decade Award, so it’s only fitting that we’ll be honoring him with this tribute performance at the ACMs,” said George Strait.

“I commend the Academy on naming the ACM Artist of the Decade Award after Dick Clark. Although there is no award the entertainment industry has that can match the magnitude of the star Dick Clark was, and still is, it is an honor to get to be a part of the Academy’s tribute to him. There may be others who have contributed as much to the music industry, but there is definitely no one that has contributed more than Dick Clark. He was music’s best friend, and a dear friend to me,” said Garth Brooks.

George Strait has won twenty Academy of Country Music Awards, including the Artist of the Decade award, an award that has only been given to four other acts in the Academy’s history. He also holds the record for the most No. 1 hits on the Billboard Hot Country Songs chart. He has sold more than 68 million records, garnering him 32 different platinum or multi-platinum albums resulting in the most RIAA platinum certifications in country music and the third in all genres, behind The Beatles and Elvis Presley. Strait recently released his newest single, “Give It All We Got Tonight”—the first release from his forthcoming 2013 album, Love is Everything, due in stores on May 14. Strait also placed #1 on Pollstar’s Concert Pulse chart in March after the first leg of his on-going two-year final U.S. tour, “The Cowboy Rides Away Tour” with special guest Martina McBride.

Garth Brooks is a pivotal figure in the history of country music, garnering over twenty ACM Awards, including six Entertainer of the Year Awards, an Artist of the Decade award, and a Cliffie Stone Pioneer Award, honoring individuals who are pioneers in the country music genre. Certified by the RIAA in 2000 as the #1-selling solo artist in U.S. history, Brooks has sold in excess of over 128 million albums and has received every accolade the recording industry can bestow on an artist. With his commercially savvy fusion of post-Merle Haggard country, honky-tonk, post-folk-rock sensitive singer/songwriter sensibilities, and '70s arena rock dramatics, Brooks brought country music to a new audience in the '90s — namely, a mass audience. Before Brooks, it was inconceivable for a country artist to go multi-platinum. He shattered that barrier in 1991, when his second album, No Fences, began its chart domination, and its follow-up, Ropin' the Wind, became the first country album to debut at the top of the pop charts. He is currently raising his children in Oklahoma.