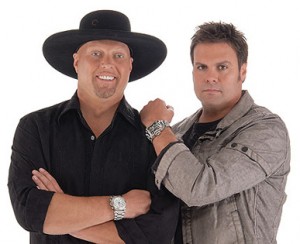 “We couldn’t be more thrilled about welcoming Montgomery Gentry to the Blaster Records family,” shares Derek Simon, President of Blaster Records. “Eddie and Troy are proven hit makers and consummate professionals. We can’t wait to get started and look forward to a very successful run together.”

Gentry echoes Simon’s sentiment noting, "Eddie and I couldn't be more excited to be on the Blaster roster. Signing with these guys was a no brainer for us when we saw the team they have to put around us. It's a great bunch of people that we look forward to working with." Montgomery adds, “Man, I can't say enough about the Blaster guys and we haven't even cut the album yet! I can already tell this is going to be an awesome ride!

Montgomery Gentry is comprised of Troy Gentry and Eddie Montgomery who, together, have celebrated multiple awards and nominations from the CMA, ACM, and GRAMMYs. They have released more than 20 charted singles, with anthems like "My Town" and "Hell Yeah" becoming indelible parts of the honky-tonk landscape. They have hit the top of the singles charts five times, with "If You Ever Stop Loving Me," "Something To Be Proud Of," "Lucky Man," "Back When I Knew It All" and "Roll With Me."

CMT and Average Joes Entertainment invite fans to party with Colt Ford and friends live from Center Stage in downtown Nashville from 10:30-12:00 midnight CT, Thursday, February 28, 2013, at an exclusive 90-minute live stream event at www.coltpartylive.cmt.com, CMT’s official Facebook page or CMT.com via mobile devices. The event, taking place during Nashville’s annual Country Radio Seminar (CRS), is emceed by CMT’s SVP of Music Strategy Leslie Fram and will feature exclusive performances by Montgomery Gentry, Colt Ford, JB and the Moonshine Band, The LACS, JJ Lawhorn, LoCash Cowboys and Colt Ford. The FREE, 21+ event is open to the public for the first 250 people and all CRS attendees.

“CMT is committed to showcasing the latest and greatest country music to our fans, on multiple screens,” said Leslie Fram, SVP of Music Strategy, CMT. “Everyone in Nashville knows what a party CRS is, so the live stream with Average Joes’ dynamic roster is the perfect chance to pull back the curtain.”

Fans can tune in to the live stream www.coltpartylive.cmt.com to catch this incredible line up of Average Joes’ artists: