“This is honestly the most fun day of my year, and it brings the whole community together for a great cause,” said Bentley. “We got rained out last year for the first time, so I want to make up for it in a big way. The lineup is going to be killer, and it'll be a fun way to kick off a big week that celebrates country music with the CMA Awards just a few days later.”

Since first hitting the pavement in 2006, Bentley has visited seven cities to raise over $2 million for Children’s Miracle Network Hospitals across the country. This year’s annual event will begin at the Harley Davidson of Columbia (1616 Harley Davidson Blvd., Columbia, TN) for an hour-long ride that ends downtown at Nashville’s Riverfront Park. From Riverfront, Bentley will take the stage for a family-friendly day of music with a lineup that will continue to grow as the event approaches.

"We are so grateful to Country Weekly for its support of MOC during CMA Music Fest for the seventh consecutive year," exclaims MOC's Katy Epley. "The generosity displayed from the entire entertainment industry and all the artists who participate in our Bedside Performance Programs, fundraising concerts and auctions makes it possible for us to continue delivering the healing power of music to those who need it most."

For more information on MOC's mission and Beside Performance Programs, how to volunteer and support MOC, please visit www.MusiciansOnCall.org. 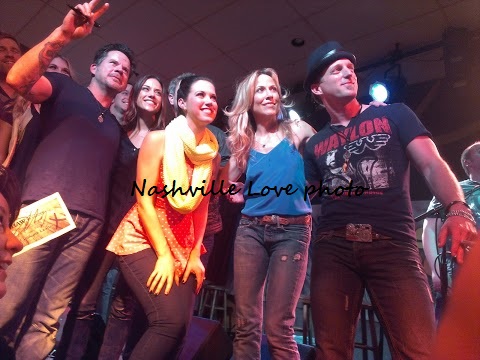 WSSL 100 held their semi-annual Acoustic Jam on March 20 to benefit St. Judes Children's Hospital and filled the Blindhorse Saloon in Greenville,SC, to capacity with excited country fans. Appearing at the all acoustic show were Gary Allan, Jana Kramer, Thompson Square, Easton Corbin and The Henningsens. The line to get into the free show began forming around 11am with the stars not scheduled to take the stage until 8pm. Tickets were required to attend the standing room only show which many acquired by donating to Whistle 100's annual radiothon to benefit St. Judes. Others got their ticket to jam at the numerous ticket drops in the surrounding areas of the Upstate. A few lucky fans even won VIP party passes which allowed them the opportunity to mingle with the artists, get autographs and pictures.

The two+ hour show kicked off with The Henningsens, newcomers to many, but the family trio are no strangers to the music business and have been writing hits for years that you hear on the radio every day. The seasoned songwriters performed one of the songs recorded by The Band Perry that they penned, "All Your Life". After sitting in on their sound check, I was blown away by their beautiful harmonies even before they took the stage for the real show. The acoustic performance of the title track off their album "American Beautiful" was incredible.

Easton Corbin wooed the crowd with his sweet country boy charm, belting out several of his hits. It was a sing along as the crowd didn't miss a word singing with Easton during "All Over The Road", "Loving You Is Fun" and "A Little More Country Than That". Corbin was a crowd favorite for sure.

Thompson Square took a quick breather from Luke Bryan's Dirt Road Diaries tour to stop by and entertain for a good cause. The husband and wife duo even shared an onstage kiss after a little encouragement from Jana Kramer.Keifer and Shawna performed hit after hit during the show, "Glass", "If I Didn't Have You", "Are You Gonna Kiss Me Or Not" and "I Got You". The lovely couple capped off their performance with the title track from their album that releases Tuesday, March 26, "Just Feels Good."

Jana Kramer has an awesome, energetic stage presence that partners with her beautiful voice and talent becoming the perfect recipe for an incredible, crowd pleasing charismatic performer. Kramer performed her latest single "Whiskey" with the crowd singing along word for word. Her performances of "Why Ya' Wanna" and "I Hope It Rains" both had the crowd cheering. If you weren't a fan of Kramer when you arrived, you were when you left. This girl has personality, stage presence and staying power. Jana even treated the crowd to a song she recently wrote which she says "may or may not make it onto my next album, but I love to sing it". The song had a "Johnny and June" reference which we know has meaning to Kramer and her fiancee', Brantley Gilbert, after hearing the story of his sweet proposal. And yes, the diamond on her finger shined like the bright star that she is from the stage.

Gary Allan certainly had a hand in the masses that came out for the show. It's not too often that you get the chance to see an artist with Allan's staying power in such a small venue. He even commented, "I haven't been in this bar in ten years", but he clearly enjoyed the intimate setting as he sang some old and new hits for the close to 2000 in attendance. He performed "Right Where I Need To Be" first, one of my absolute favorites, especially acoustic. That was followed by "Smoke Rings In The Dark", "It Ain't The Whiskey" from his latest chart topping album, 'Set You Free', along with "Every Storm (Runs Out Of Rain)", the lead single from the cd, which he just celebrated at a #1 party in Nashville. Gary even did a special request for a fan when he performed "Sand In My Soul" from his latest album. 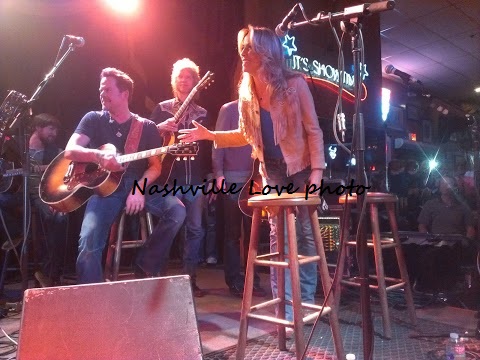 But wait! There's more. Sheryl Crow, yes, Sheryl Crow showed up as a surprise guest and joined the already amazing lineup on stage to the delight of the crowd. After hugging Allan and commenting on all the talent she was joining, Sheryl took to her spot performing acoustic versions of "Easy", "Picture" into "If It Makes You Happy" and "Strong Enough To Be My Man". It was the perfect addition to an already incredible night of great music. And who doesn't love a surprise, especially a good one like that!

The stars all stayed out on the stage signing autographs and greeting fans long after the show was over. It was a wonderful event for the fans and a great way to help St. Judes Children's Research Hospital continue their work that blesses so many precious lives.

In addition, the evening featured a surprise appearance by Taylor Swift, who took the stage to lend her support to Florida Georgia Line, who will open select dates on her RED Tour, which kicks off March 13th.

Easton Corbin Releases New Music Video "All Over The Road"

Mercury recording artist Easton Corbin released his new music video, “All Over The Road,” today to VEVO and YouTube and to all video channels on February 25. The Roman White directed video was shot this past fall outside of Saint Augustine, FL and showcases Easton in a “theatrical movie trailer.”

Watch the video below.

Easton will be “all over the road” this summer as he joins Blake Shelton on the Ten Times Crazier Tour that begins July 19 and runs into the fall.