Review: Outshyne Has "A Night With Your Name On It" This Tuesday 9-9-14 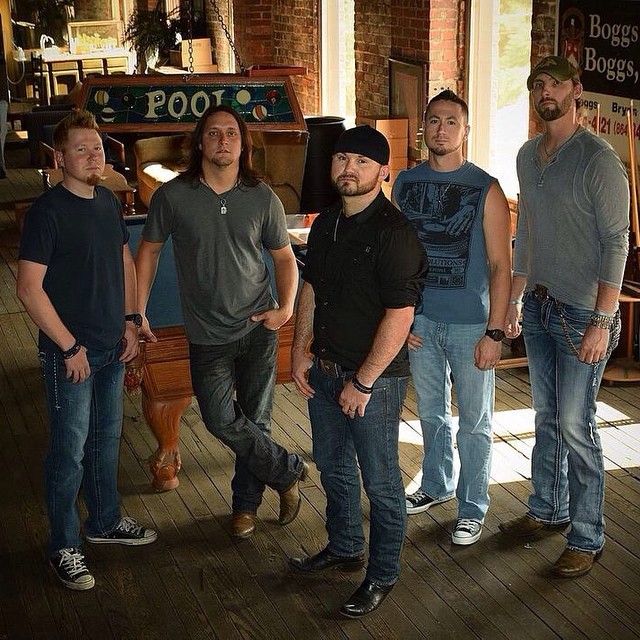 The guys of Outshyne have come a long way since their days of flipping burgers at Burger King, where all but one of the band members worked years ago. Today they are traveling and playing music to fans live while staying busy recording new music for their CD which is set to release in early 2015. South Carolina natives Waylon Owings (lead singer, guitar), Josh Coleman (lead guitar, vocals), Casey Joe Kelly (rhythm guitar, vocals), Jason Paxton (bass) and Matthew "Smiley" Norris (drums) make up the band. The guys have opened for the likes of Jake Owen, Eric Church, Lee Brice, Easton Corbin, Gary Allan, Colt Ford and many other country stars. They have had a whirlwind year with their single "Moonlight Crush" hitting number 1 on SiriusXM The Highway Hot 45 back in July. Watch the official music video for "Moonlight Crush" below.

Two new songs from their upcoming CD are releasing this Tuesday (September 9) on iTunes and other digital outlets. We had the opportunity to hear these early, can't stop listening and can't wait for the fans to get their hands on the new music in just a few days.

"Night With Your Name On It", written by their friends Cole Swindell, Adam Sanders, & Thomas Archer, fits right in with today's country music and has the sound that country fans are wanting to hear. Acoustic cords lead into the electric guitar and the rocking sound continues throughout the song. The up-tempo beat will have fans moving as they are singing along to the catchy lyrics which are perfect for Waylon's voice. A modern love song, expect to hear this one playing on country stations across the nation soon.

"Whiskey Whisper" was penned by Chase Rice, Cole Taylor & Thomas Archer. The first beat of the music comes on and it doesn't seem very country, then quickly the sound of a modern country tune combining rock and a little rap takes over...add a sultry female voice to the vocals and you have a hit in the making. A seductively romantic tune that's not too slow, this is one of many songs of its kind out presently but definitely has a place in the niche of rockin' country.

If these songs are any indicator of what the full CD will be when it releases, expect the guys of Outshyne to take country music by storm.  This could be one of those CDs reminiscient of Florida Georgia Lines' freshman cd, you know the kind, where every song deserves to be a hit.

Warner Music Nashville will be hosting this summer’s first Pickin’ On The Patio party on Wednesday, May 28 featuring Cole Swindell. Over the years, Pickin’ on the Patio has featured several WMN and Word Artists that continually fill the patio to capacity. This year, to accommodate our artists’ busy tour schedules, the monthly celebration will be moving to Wednesdays. Doors open at 5:00pm and show starts at 5:30pm. Pickin’ On The Patio will be held the fourth Wednesday of every month, from May through September, on the WMN Patio.

“I’m extremely proud to open our 5th season of Pickin’ On The Patio with Cole Swindell, who’s the only artist to debut with a #1 single in 2014,” said Peter Strickland (EVP/GM, WMN). “We have an incredible roster of artists who are ready to turn it up this year, so you won’t want to miss the celebration. We look forward to hosting everyone on Wednesdays for this year’s 2014 series.”

Mark your calendars for the next one on June 25th. Special thanks to our sponsors Bound’ry/ South Street, GiGi’s Cupcakes, Aramark and AJ Turner / Bud Light.

Cole Swindell celebrated his single “Chillin’ It” being certified both Gold and Platinum by the RIAA at his CMT Listen Up taping Monday. With a busy tour schedule and rapid sales of the single, “Chillin’ It” was certified Platinum before there was even time to celebrate its Gold certification. His current single, “Hope You Get Lonely Tonight,” is impacting radio now and rapidly climbing the charts. “You only get a first single once,” said Cole about the exciting milestone. “The fact that it was accepted by not only radio but over one million fans is beyond anything I could ever have dreamed up and this is something I will never forget!”

Cole Swindell’s second single, “Hope You Get Lonely Tonight,” off his self-titled Warner Bros. Records debut, impacted radio today and immediately became today’s No. 1 most added record at Mediabase/Country Aircheck following his No. 1 hit “Chillin’ It” racing to the top of the Country Aircheck/Mediabase chart and Billboard’s Hot Country Songs chart.

Swindell is set to perform on Good Morning America this Thursday, March 27, and is currently on tour with Luke Bryan on his sold-out “That’s My Kind of Night” tour with dates running through March. Visit https://www.facebook.com/coleswindellmusic/app_123966167614127 to find out when Swindell will be visiting your city.

Singer-songwriter and Georgia native Cole Swindell has been part of the Nashville music scene since before his current platinum hit, “Chillin’ It,” became a sensation on “Highway Find” on Sirius/XM. While on the road with good friend Luke Bryan, Swindell used the time to master his craft and wrote several songs for Bryan as well as cuts for Thomas Rhett, Scotty McCreery, Florida Georgia Line, Chris Young and Craig Campbell. Now with Warner Bros. Records, Swindell’s single “Chillin’ It” has proven to connect with fans by rapidly climbing to the top of country charts. Known for his high-energy performances, Swindell has a growing reputation as one of Nashville’s most exciting young performers 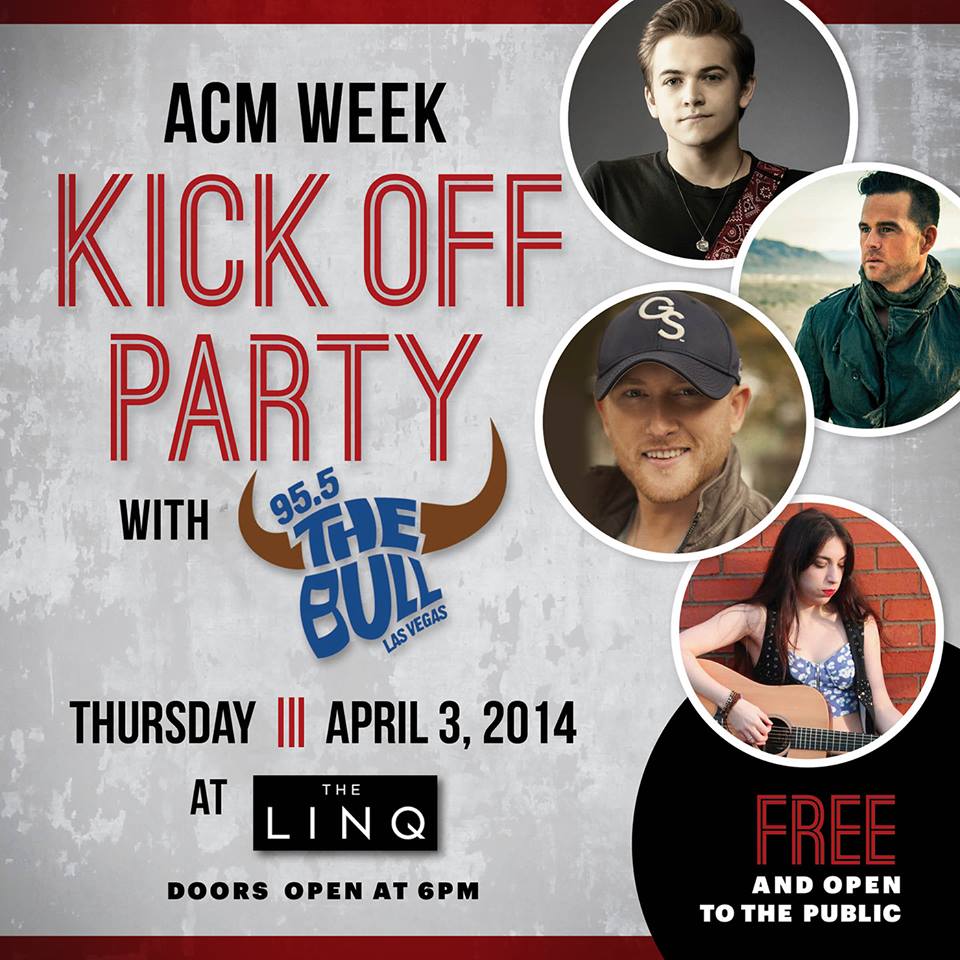 Last night’s sold-out Luke Bryan concert at the Rupp Arena in Lexington, KY was postponed due to a stage collapse that occured after his show this past Thursday.  According to news site nbc4i.com, officers were dispatched to Columbus, Ohio’s Schottenstein Center at about 12:04 a.m. Friday on a report of a stage collapse. The Ohio State University Police Division reported that four stagehands received minor injuries. Kyle Davis, 47, of Columbus; Leonard Devrijer, 49, of Columbus; Andrew Gammon, 26, of Nashville; and Steven Meyers, 41, of Bremen were transported to an area hospital where they were treated and released.  A preliminary investigation suggests that a forklift may have struck the back side of the stage, causing that portion of it to collapse. The accident is still under investigation at this time.

Friday’s show was slated to be the second date on Bryan’s 2014 That’s My Kind of Night Tour, which kicked off Thursday night in Columbus, OH. The tour, which also features Lee Brice and Cole Swindell, stops in Knoxville, TN tonight.

A statement posted on Bryan’s website Friday, reads:  "Tonight’s Luke Bryan concert in Lexington, Kentucky will be rescheduled for Friday, February 21 due to damage sustained to a piece of the stage during production load out after last night’s show in Columbus, Ohio. The damage occurred after the show had ended and no fans were in the building. The tour’s team will make the necessary repairs to the production elements so the tour may continue." Previously purchased tickets for Lexington, Kentucky will be honored for the reschedule date on Friday, February 21st .

Luke called into a Lexington radio station -- the Officer Don & DeAnn show -- to talk about the accident and the postponed concert.  Listen below. Cole Swindell‘s debut single, “Chillin’ It,” has become the first single in all genres to garner a Gold certification from the Recording Industry Association of America (RIAA) in 2014. The single has sold more than 600,000 copies.

Cole's self-titled debut album will release on Feb. 18th. and he will be joining Luke Bryan’s That’s My Kind of Night Tour, beginning Jan. 16th in Columbus, Ohio.

Watch The Official Video For Cole Swindell's "Chillin' It"! 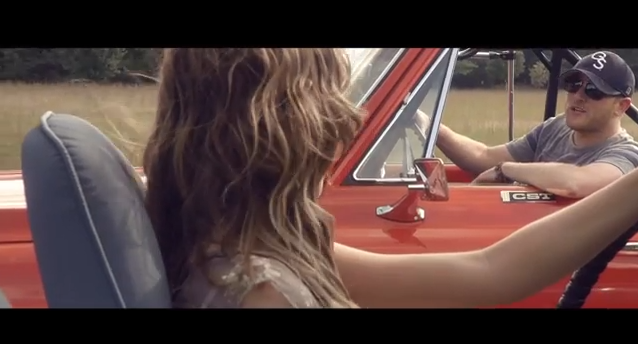 The official music video for Cole Swindell's "Chillin' It" is here! Click HERE to watch!

After opening for various dates on the "Dirt Road Diaries" & "Farm Tour" tours this year, Cole will once again join Luke Bryan (along with Lee Brice) on his "That's My Kinda Night" Tour starting in January!

Cole Swindell on the "That's My Kinda Night" Tour