Dan + Shay Announce The "Where It All Began Tour" 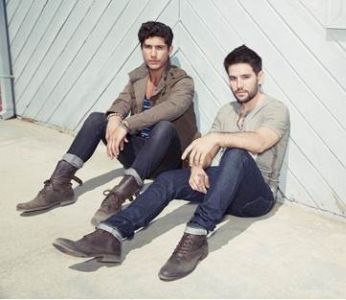 Critically acclaimed duo Dan + Shay (Dan Smyers and Shay Mooney) have announced fall tour dates on their “Where It All Began Tour,” kicking off October 9th in Minneapolis, MN and stopping at New York City’s Highline Ballroom October 23rd (full list of tour dates below). The pair are currently celebrating their first CMT Music Video Award nod for “Duo Video Of The Year“ for their gold-certified debut single, “19 You + Me,” while their new single, album opener “Show You Off,” was most added in its’ first week at country radio last week.

With an exciting No. 1 album debut of Where It All Began on Billboard’s Country Albums Chart, the breakout act became the only duo in SoundScan reported history to debut in the top spot with their first album on the Country Albums Chart. Dan + Shay are also the highest Billboard charting debut artists of 2014 and have impressively sold over 700,000 total tracks. People Magazine exclaimed “[Dan + Shay] make a pretty sweet soundtrack for your spring,” while USA Today called them “storytellers at heart,” with “sun kissed harmonizing and carefree delivery.”

The ACM Award Nominees have been on the road with Hunter Hayes this spring, stopping at iHeart Radio’s first annual Country Festival and Stagecoach before getting ready to join Blake Shelton this summer. A full list of tour dates can be found at www.DanAndShay.com (on-sale dates and times to be announced soon).

Dan + Shay Awarded RIAA Gold Certification For 19 You + Me

Critically acclaimed duo Dan + Shay (Dan Smyers and Shay Mooney) have been awarded their first ever RIAA Gold Certification for their debut single, “19 You + Me.” The accreditation follows the exciting No. 1 album debut of Where It All Began on Billboard’s Country Albums Chart. The breakout act isthe only duo in SoundScan reported history to debut at No. 1 with their first album on the Country Albums Chart and is the highest Billboard charting debut artists of 2014. Already selling almost 650,000 total tracks including over 550,000 of their hit single, Dan + Shay showcased “19 You + Me” on Good Morning America and The Ellen DeGeneres Show, with both shows naming them “one of the hottest new acts in country music.” The single was spotlighted as a “Hot Music Download” by People Country and exclaimed to “equal success” in USA Today. People Magazine noted “[Dan + Shay] make a pretty sweet soundtrack for your spring,” while USA Today called them “storytellers at heart,” with “sun kissed harmonizing and carefree delivery.”

The ACM Award Nominees are currently touring with Hunter Hayes through May, stopping this past weekend to perform at Stagecoach music festival in Indio, CA, continuing on the road in June with Blake Shelton.

Named an “act that will help define 2014” by Billboard, Dan + Shay wrote every song on their album, as well, the album was produced by Smyers and co-produced by Scott Hendricks and Danny Orton.

May 1 Bangor, ME Cross Insurance Center

Dan + Shay Release "Where It All Began" TODAY!

The album, co-written entirely by Dan + Shay, features their hit debut single, "19 You + Me". Pick up your copy on iTunes, www.DanAndShay.com, or at your favorite local retailer today!

Dan + Shay Release "Where It All Began"

Dan + Shay’s highly anticipated album, Where It All Began, is now available for pre-order via iTunes (where it’s already No. 7 on iTunes Country Chart) and on www.DanandShay.com. As the only country artists named to CNN’s “Fresh Faces” and Billboard’s “2014 Artists to Watch,” the ACM Award nominees will officially release their debut album April 1st on Warner Bros. Records. Celebrating with performances on Good Morning America, appearing on the day of release Tuesday, April 1st and on The Ellen DeGeneres Show, appearing Friday, April 4th, the week culminates with The ACM Awards where Dan + Shay are up for their first ever nomination for “Vocal Duo of the Year.”

Dan + Shay are also offering fans two exclusive packages in their official store: the plus package and deluxe package. Both feature the album, Where It All Began, in digital and physical formats, along with a Dan + Shay logo wristband. The deluxe package, which is available in limited quantities, also includes an album release t-shirt and a special personally signed single poster.

Heading out on the road this month, Dan + Shay will join GRAMMY nominee, Hunter Hayes, on his “We’re Not Invisible Tour” kicking off on March 20 (dates listed below) and continue this summer with superstar, Blake Shelton, on his “Ten Times Crazier Tour 2014″ kicking off in June (dates and venues TBA). Dan + Shay are the only new artists featured on the first annual iHeartRadio Country Festival being held in Austin March 29th, an all-star event which is already sold out.

Called one of the “acts that will help define 2014” by Billboard, the country duo wrote the entire 12-track album, while it was produced by Smyers and co-produced by Scott Hendricks and Nashville songwriter, Danny Orton (full tracklisting below). The first single from Where It All Began, “19 You + Me,” has already sold 350,000 tracks and is nearing the Top 10 on the country charts. The nostalgic feel-good song earned Dan + Shay the title of the most-added duo at country radio in 2013.

WHERE IT ALL BEGAN ALBUM TRACK LISTING

8. Somewhere Only We Know 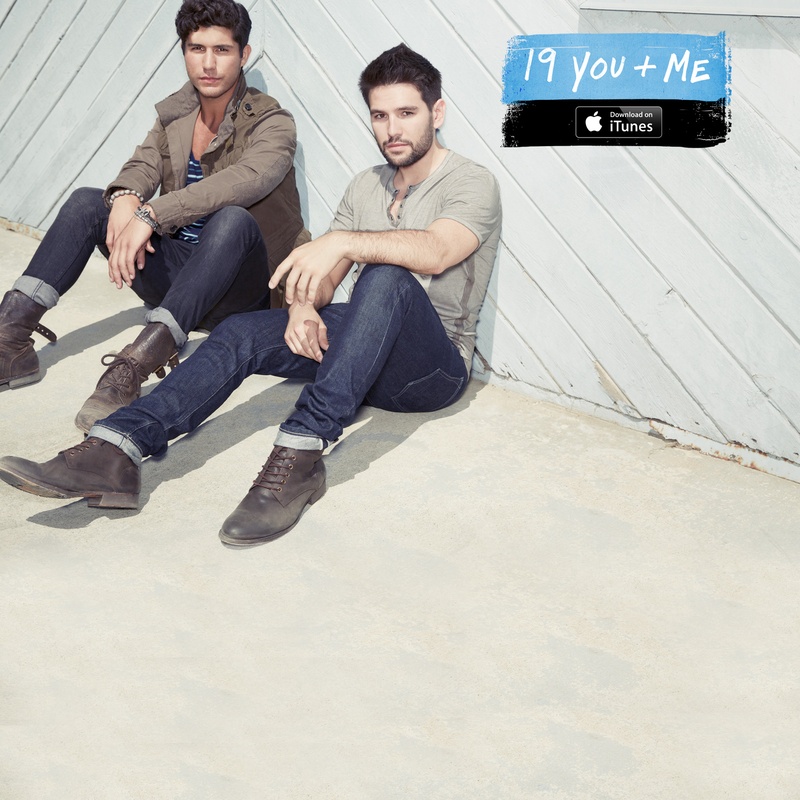 Dan + Shay (Dan Smyers and Shay Mooney) are set to release their debut album April 1st on Warner Bros. Records. The yet to be titled release is written entirely by the pair, produced by Smyers and co-produced by Scott Hendricks and Nashville songwriter, Danny Orton. On February 1st, just a couple days after receiving their first ever nomination for 2014 ACM Award’s “Vocal Duo of the Year,” the pair made their Grand Ole Opry debut, performing their Top 20 single “19 You + Me” on the historic stage along with “First Time Feeling” from their upcoming album to mark the special occasion.

Dan + Shay recently released the official music video for “19 You + Me,” which was filmed in Myrtle Beach, directed by Brian Lazzaro and edited by Patrick Tracy. Following an exclusive reveal on CMT, Artists.CMT, iHeartRadio and more than 120 Clear Channel Media and Entertainment’s country station websites on CMT, the video was quickly embraced ranking No. 1 across the entire artist platform on MTV, VH1, and CMT — notably outranking all other post Grammy artist videos. The nostalgic feel-good debut single has impressively sold a quarter million tracks and shot into the Top 20 on the charts after only thirteen weeks, earning Dan + Shay the title of the most-added duo at country radio in 2013.

This spring Dan + Shay will go on tour with GRAMMY nominee, Hunter Hayes, on his “We’re Not Invisible Tour” kicking off on March 20 (dates listed below). The country duo will continue on the road this summer with superstar, Blake Shelton, on his “Ten Times Crazier Tour 2014″ kicking off in June (dates and venues TBA). Dan + Shay are also the only new artists included on the first annual iHeartRadio Country Festival being held in Austin March 29th, which is already sold out and includes an all-star line-up.

Smyers, a Pittsburgh, Penn. Native, and Mooney, originally of Natural Dam, Ark., realized they had a special musical connection after meeting at a party at Smyers’ house only one year ago. What started as a late night jam session among new friends, led to daily writing sessions that resulted in songs which quickly caught the attention of publishers, label heads and radio programmers a like. For more info, please visit www.danandshay.com, and follow http://twitter.com/danandshay.

The debut single from country newcomers Dan + Shay (Dan Smyers and Shay Mooney), “19 You + Me,” is impacting radio now. Garnering an impressive 59 first-week adds at Country Radio, Dan + Shay have the most added debut of 2013 to date, setting the record for the biggest first week by a new duo in Country Aircheck history. The catchy, feel-good single is the first track from their upcoming album due to be released next year on Warner Bros. Records. Written by the duo, along with Nashville songwriter Danny Orton, the song is available now on iTunes. Currently on the road visiting radio stations across the country, Dan + Shay have been received with a warm reception:

◾“After hearing the number of songs these guys have with major hit potential – I predict Dan + Shay to be one of the biggest breakthrough stories of next year!” – Tim Richards, KMLE/Phoenix

◾“Usually you have to choose between 2 or 3 tracks you like as potential hit singles. These guys have 15! This is crazy good.” – Gregg Swedberg, KEEY/Minneapolis

◾“I was totally blown away when listening to Dan + Shay’s music. The single is great and they have a lot of hits behind it! The energy they bring to their music is unreal and will sound awesome on the radio.” – DJ Stout, WSOC/Charlotte

A lyric video for “19 You + Me” created by Dan, Shay and videographer Patrick Tracy is posted on www.DanAndShay.com.

Meeting in Nashville last December, Dan and Shay quickly hit it off with their musical similarities. The two began writing together and from those first writing sessions, their relationship grew to include performing in Nashville. Realizing they had discovered an infectious original sound all their own, the duo decided to make a record together mixing country rock/pop seamlessly throughout intimate power-ballads and stadium-worthy hits.