Yesterday, in partnership with Sixthman Ltd., Florida Georgia Line announced the first ever “This Is How We Cruise” music festival at sea, setting sail on Norwegian Pearl November 8-12, 2014. This exciting four-day musical cruise experience will set sail from Miami, FL to Great Stirrup Cay, Norwegian’s Private Island in the Bahamas.

This all-new cruise event was inspired by their chart-topping, multi-platinum hit “Cruise,” and the title of their deluxe album, “Here’s To The Good Times… This is How We Roll” an expanded version of their Platinum-certified debut, releasing on 11/25. Guests sailing on board the “This Is How We Cruise” will enjoy two live performances by Florida Georgia Line, and all guests will receive a photo with the guys and have a chance to attend a Q&A session on the last day of the cruise.

In addition, a talented lineup of additional artists will also perform live shows on board throughout the four-day event. Artists will perform on multiple stages throughout the ship as well as host activities, intimate fan experiences and live on-stage collaborations.

In addition to all of the activities and entertainment offered during the “This is How We Cruise” event, guests will take advantage of Norwegian Pearl’s 13 bars and lounges, 19 dining experiences, outdoor pool, hot tubs, expansive spa and fitness center and so much more. In addition, guests can test their strength on the outdoor rock climbing wall, bowl a few frames at the ship’s bowling alley, or try their luck in The Pearl Club Casino. Norwegian Pearl features a wide range of stateroom categories to fit all lifestyles and budgets, from the perfectly-appointed inside staterooms to luxurious penthouse suites in the Haven.

Great Stirrup Cay, Norwegian Cruise Line’s Private Island in the Bahamas, offers several activities for guests of all ages. Explore the ocean floor for buried treasure on a snorkeling outing, tour the island by kayak, go crazy on the gigantic “Hippo” slide or just kick back and relax on the island’s pristine white sand beach or in one of the island’s Cabanas on the Cay.

Pre-sale sign-ups for the “This is How We Cruise,” began November 20, 2013. Guests wishing to sail on board this exciting event can reserve their spot on board for as little as $150.00 down, based on double occupancy rates. This highly anticipated event goes on sale to the general public in January of 2014. For additional information about the event, visit www.fglcruise.com or call 877-379-9172. SiriusXM Radio will welcome duo Florida Georgia Line to perform at The Troubadour in Los Angeles at an exclusive invitation-only concert for SiriusXM listeners on Monday, Nov. 25. The private concert will be broadcast on Wednesday, Nov. 27 at 8 p.m. ET via satellite on The Highway (channel 59), through SiriusXM’s Internet Radio app, and online at www.siriusxm.com.

“Hearing ‘Cruise’ on The Highway for the first time is a bucket list moment we will never forget,” says Florida Georgia Line’s Tyler Hubbard. Florida Georgia Line’s Brian Kelley adds, “We are incredibly thankful to SiriusXM for all of the support they have given us and are excited to bring the good times to their listeners!” 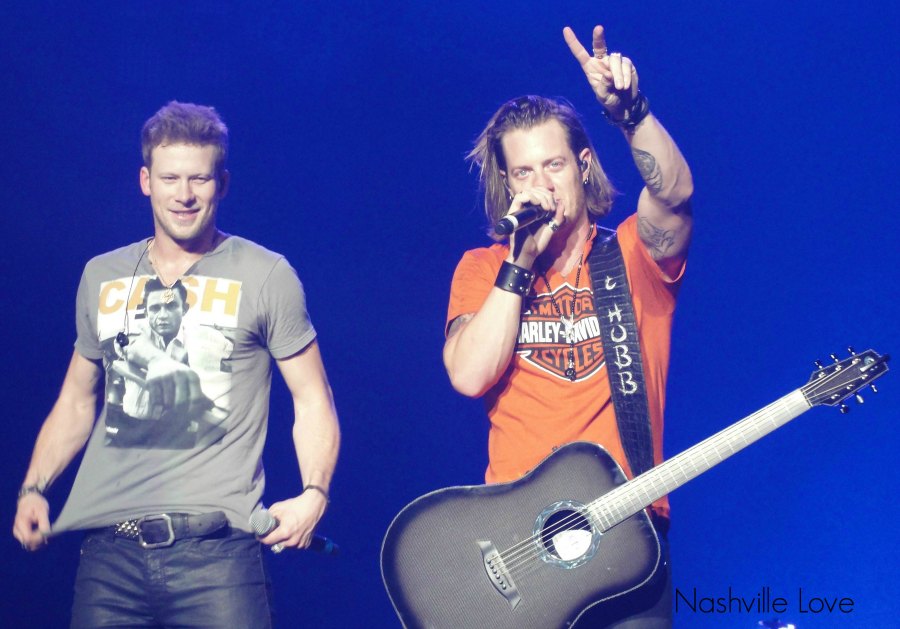 Florida Georgia Line played to a sold out, record breaking crowd in Greenville, SC, this past Saturday, Nov. 9. It was the largest crowd yet on their first headlining tour. Fans endured difficulties once they arrived to the arena due to trouble with Ticketmaster’s paperless ticketing system which was down. As a result, many were still outside waiting to get in when the opening acts, Tyler Farr and then Colt Ford, took the stage. Everyone eventually got inside and experienced a night of great music.

Brian Kelley and Tyler Hubbard put on a phenomenal show with high energy from start to finish. The guys barely stood still for the entire performance keeping the crowd on their feet dancing and singing along. It didn’t appear that a single one of the sold out seats had anyone sitting in them for the duration of the show. The two were still celebrating their two wins at the CMA Awards last week where they took home trophies for Vocal Duo of the Year and Single of the Year for their hit song “Cruise”.

The duo performed all the songs on their current cd, ‘Here’s To The Good Times’, also the name of their current tour. The sound of the crowd belting out the words to almost every song was as loud as the band as the guys played hit after hit, “Cruise”, "It’z Just What We Do”, “Stay”, “Round Here”, “Party People”, “Dayum, Baby”, “Get Your Shine On”, "Tell Me How You Like It”, “Here’s To The Good Times”, “Hell Raisin’ Heat Of The Summer” and “Tip It Back”. They did an amazing cover of “Grenade” (Bruno Mars) adding their own style to the song. Much to the crowd’s delight, Colt Ford and Tyler Farr joined the guys onstage for a sing along of rap and dance tunes. FGL put on one of the most entertaining and fun shows I’ve seen. These guys have the support of an awesome band and I suggest you get a ticket and see them live if you haven’t already. I’ll definitely be seeing them every chance I get!

Tyler Farr opened and took the stage first. He had the crowd singing along to his current radio hit, “Redneck Crazy”. Farr was joined by Colt Ford during his set.  All of these guys seem to be having a blast out on the road together. Ford then took the stage a little later for his set which was full of country rap and good fun for all. He performed “Dirt Road Anthem” which he co-wrote and originally recorded with Brantley Gilbert, which was a crowd favorite.

Later this month (Nov. 25), FGL will release a deluxe version of their debut album, titled 'Here’s to the Good Times . . . This Is How We Roll'. The project will contain all 11 tracks found on their 'Here’s to The Good Times' album as well as six new tunes:  "This Is How We Roll" (feat. Luke Bryan),"Take It Out On Me", "People Back Home", "Headphones", "Hands On You", and "Cruise" (feat. Nelly) [Remix].

Check out our gallery of photos from the show here.