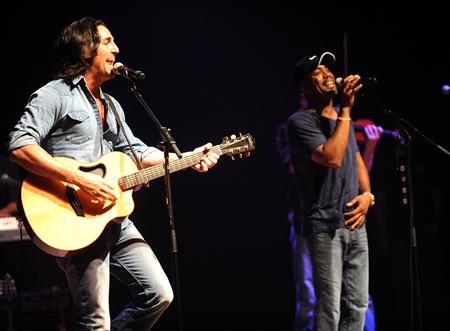 Jake Owen, Darius Rucker and Clay Walker are preparing to show off their golfing skills on Thursday (07Feb13) in a charity pro-am tournament in California.

The AT&T Pebble Beach National Pro-Am tournament began on Monday (04Feb13) and will run until Sunday (10Feb13), and it features 156 pairs who will battle it out to be crowned the champions.

Owen took to his Twitter.com page on Tuesday (05Feb13) to share a video of him practicing his golf game with professionals Donald Roland 'D.J.' Trahan, James Driscoll and Ricky Barnes.

He tweeted, "Today was unreal... I birdied (hole number) 18 at Pebble Beach. Have my twin bro (brother) caddying this week."

The tournament has been running since 1937 and has raised more than $100 million (£63 million) for charity.