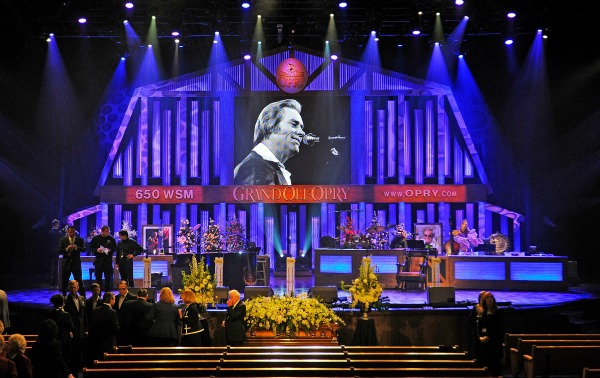 Photo courtesy of The Tennessean

George Jones performed hundreds of times at Nashville's Grand Ole Opry House – whether on the WSM Radio show, or appearing on such shows from the auditorium like the CMA Awards, so it's only appropriate that this morning's funeral has turned out to be a farewell fit for a country king.

Open to the public, fans started lining up yesterday for a chance to say farewell to the artist known as "The Possum." Famous friends who either spoke or performed during the 2 hour, 40 minutes-long service included Kid Rock, Travis Tritt, Alan Jackson, Patty Loveless, former First Lady Laura Bush and others.

WSM announcer Eddie Stubbs welcomed the crowd to the Opry House, and proceeded to introduce longtime family friend Tanya Tucker and the Imperials, who performed a beautiful version of the Gospel classic "The Old Rugged Cross," ending the performance by saying "I'm gonna miss you, Possum." Tucker was one of several acts that was slated to perform with Jones on his final concert – which was slated for November 22 in Nashville.

Nashville radio personality Keith Bilbrey spoke next, followed by Tennessee Gov. Bill Haslam who praised the singer for being an ambassador to the state of Tennessee.

Pastor Mike Wilson was next on the hallowed stage, who asked for prayers on behalf of George's family and friends. Bilbrey then introduced a pair of artists who had deep ties to Jones. The first was Randy Travis, who relayed a story to the crowd about a concert date where Jones persuaded Travis to close for him. It was a Travis duet , "A Few Old Country Boys," that brought Jones his final top ten entry on the singles chart in 1990. With simply an acoustic guitar on his lap, Travis performed "Amazing Grace."

The Oak Ridge Boys followed Travis with a performance of "Farther Along." The legendary foursome appeared with Jones on his 1982 top ten record "Same Ol' Me." One of Jones's fellow Texans, CBS News personality Bob Scheiffer, was next to eulogize the singer. He recalled listening to Jones on the airwaves of the Grand Ole Opry, and said that though everybody wanted to sing like George Jones, ‘You couldn't sing like George Jones...if you weren't George Jones.' He also relayed memories of his growing up years as relayed to him by Jones in an interview. Scheiffer also commented that in 2008, Jones was a little concerned about attending the Kennedy Center Honors ceremony where he was going to be celebrated because "He didn't think people in Washington didn't like country music, and wouldn't know who he was."

A couple of Jones' fellow Grand Ole Opry members were next in the program. Charlie Daniels walked onto the stage, recalling the first time he heard the voice of George Jones, and also cited the influence he has had on so many artists over the years. Daniels also told a story about longtime producer Billy Sherrill saying that Jones was "the only singer who could make a five-syllable word....out of ‘church." He then grabbed his guitar, and offered a simple yet moving version of "Softly And Tenderly."

Travis Tritt – one of many stars who appeared on Jones' 1992 hit "I Don't Need Your Rockin' Chair" - was next, performing Kris Kristofferson's "Why Me, Lord," which Jones also recorded. He also spoke of the love George felt for Nancy, recalling a conversation where Jones told him "She's my angel."

One of Nashville's favorite "angels," Barbara Mandrell was next on the stage. Visibly moved, Mandrell – his duet partner on 1981's "I Was Country When Country Wasn't Cool," told the crowd that Jones would always be the "Greatest singer of all time in Country Music, and there would never be anyone to fill his shoes." She also shared an anecdote about meeting Jones at age 13. Mandrell – a teenage prodigy on the steel guitar – talked about the fact that Jones didn't have a steel player on the bill – so he asked her to play the instrument during his performance. "George left his lasting imprint on my heart...all of our hearts. He sang for you and me, and now he's singing in glory for the one who gave him that voice. Hallelujah," she said.

Kid Rock might have been an unlikely participant in the ceremony, but the singer about an incident where Jones had asked him to write a song for him – one that he never finished. The singer talked about how difficult it can be to be married to a performer, and performed an original song called "The Best Of Me."

Frequent Jones collaborators Vince Gill and Patty Loveless were next on stage. Jones gave Gill his "Sweet 'Pea" nickname, and Loveless had covered many Jones records over the years – including her first top ten single, "If My Heart Had Windows," from 1988 – which featured Gill on harmony. Gill recalled touring in his early years with Jones and Conway Twitty – and having to perform with Jones opening, and Twitty closing. Loveless talked about covering a few Jones songs on her Sleepless Nights record in 2008 and George and Nancy driving around town trying to find it. A clerk at a record store said 'We'll get on it, Mr. Jones." The two then combined their talents for an emotional performance of "Go Rest High On That Mountain," with both artists crying throughout – bringing the capacity crowd to their feet.

Former First Lady Laura Bush was introduced by Stubbs. Bush thanked Nancy for allowing her to speak at the service. "Nobody made music like a man from East Texas like George Jones," she told the crowd to applause. She recalled putting quarters in the jukebox to hear Jones' 1964 hit "The Race Is On." She also spoke of the meetings between her husband and Jones – in 2003 when he was presented the National Medal of the Arts, and 2008 during the Kennedy Center Honors – recalling the former President working on his treadmill to "White Lightning."

Grand Ole Opry member Brad Paisley was brought to the stage by Bilbrey next, and he encouraged those watching the funeral who weren't familiar with his legacy to seek out his music, and 'find out what this ruckus is about. It's worth it." He then proceeded into Tom T Hall's classic "Me And Jesus."

Opry GM Pete Fisher followed Paisley, adding that "If you were visited by an alien from another planet, and were asked about country music, you would play them George Jones." Former Arkansas Gov. Mike Huckabee approached the podium next. He called getting to say goodbye to Jones "One of the greatest honors of my life." He also relayed what it would have meant to his father had he known he had played music with Jones on his FOX TV show. "George Jones did not sing to us.... He sang For us," said Huckabee.

Ronnie Milsap was then introduced next, saying "We're all here because we loved George Jones," before kicking off a soulful version of his 1969 hit "When The Grass Grows Over Me," a song that he called "the saddest song he had ever heard." After Milsap left the stage, Stubbs introduced Kenny Chesney, who recalled the first Jones song he ever heard was "Who's Gonna Chop My Baby's Kindlin" at his grandmother. He cited the singer as father figure, who he opened for early on in his career. "I came here today to tell Nancy I love you....and I will miss him so much."

Wynonna Judd – a neighbor to the Jones family for many years – recalled Jones sitting in the front row at Tammy Wynette's 1998 memorial service while she performed "How Great Thou Art" before her performance of the song. Judd also recalled that her first concert ever was Jones and Merle Haggard, and also praised...his hair. "The most perfect hair I've ever seen in my life," she quipped.

Wilson appeared on the stage next with closing remarks. He recalled being introduced to Jones as a youngster through his 1985 hit "The One I Loved Back Then (The Corvette Song)." He also recalled when he and his wife adopted two daughters from Haiti, that Jones and Nancy asked them to bring them over. "We talked throughout the years, and no matter how you knew him....life didn't stop for George on Friday. It started." Wilson concluded his message by quoting John 14, ending with a prayer.

Being the funeral of country's most-respected singer, it was fitting that the service ended with a song – but not just any other one. Alan Jackson took to the stage with a somber performance of the song that defined Jones' career - "He Stopped Loving Her Today," ending the song by removing his hat in honor of his mentor.

With that 'wreath upon his door' that the lyric of the song speaks of, Jones made his final exit from the Opry House to the strains of his recording of "When The Last Curtain Falls." A procession would escort his casket to his burial place at Woodlawn Memorial Park, with his band serving as pallbearers. The funeral lasted for over two and a half hours – a fitting send off to one of music's most legendary figures.