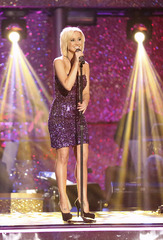 “Someone Somewhere Tonight” is the first single from Pickler’s upcoming album on Black River Entertainment, and is available for purchase everywhere digital music is sold. The song was written by Walt Wilkins and Davis Raines, and produced by Frank Liddell and Luke Wooten. The music video was directed by Roman White and shot in Tennessee.

Pickler is currently recording her new album as well as performing concerts across the nation. For tour schedules and more information, visit www.KelliePickler.com.