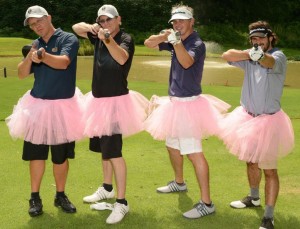 The Eric Church Band’s 2nd Annual “Put A Club In My Hand” private, invitation only 18-hole scramble golf tournament for music business professionals, fellow artists, musicians and tour staff took place on Aug. 13, 2013 at Nashville’s Gaylord Springs Golf Links. Its inaugural year, benefiting MusiCares, successfully raised over $50,000 for the charity and as everything Church-related, the event exploded in popularity. This year's 2nd Annual event more than doubled their profits raising $109,465 for MuisCares. Members of the Eric Church Band have personally received assistance provided by the organization, so the tournament originated with one goal in mind—to give back to an entity that has helped them and so many of their peers.

The tournament featured 160 golfers in a scramble consisting of LPGA Tour players and music industry professions. The event was possible due to efforts by Eric Church’s band and crew and was produced by Big Hearted Babes. The event itself included over 50 volunteers along with support from over 40 sponsors, including presenting sponsor EMI Records Nashville, label home to Eric Church.

The 3rd Annual "Put A Club In My Hand" tournament will be announced next spring. Visit www.grammy.org/musicares for more information and to support MuisCares.