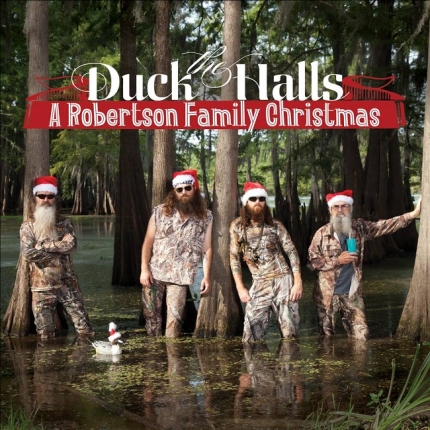 Over the past couple of years, there have been a lot of changes for the Robertson family of 'Duck Dynasty' fame. According to Sadie Robertson – daughter of Willie and Korie, nowhere is that any more apparent than when she and her mother make a trip to the local Walmart.

"Every time I go to Walmart, I feel like all eyes go straight to me," she admits. "There's one about ten miles from my house. You walk in, and there are TV's on display, and each of them has 'Duck Dynasty' on. Then you see things like 'Duck Dynasty' band aids. That is so weird to me, but people like it."

People are definitely liking it these days. Ratings for the A&E series are at an all-time high, their likenesses are on a wide array of products, and their debut musical release "Duck The Halls: A Robertson Family Christmas," looks to be one of the bonafide hits of the holiday season -- currently topping Billboard's Top Country Albums chart for a third-straight week. Sadie told Billboard that the success of the album has been staggering, yet also surprising.

"Our family really doesn't sing that much in front of each other. We only thought that Missy could sing. I'm not a shy person whatsoever, but when it come to singing, I cannot do it. So, it took a lot for me to do that, but it's crazy that so many people are hearing it. The response to it has been amazing."

Fans and critics alike have been raving about the musical talents that the Robertsons display on the album. Sadie says that she feels the family was also surprised at how well the Buddy Cannon-produced project came out.

"I think we kind of impressed ourselves with it, to be honest," she said. "We sing in church and stuff, but there's a lot of people there, so you don't really hear just the family members. We would never sing in front of each other because you've got to have thick skin in our family because they will make fun of you until the day they die. We were very surprised with each other."

"Duck The Halls" features vocal guest appearances from some of the biggest stars in the format – such as Luke Bryan, Josh Turner, George Strait, and Alison Krauss, who lends her vocals to Sadie's "Away In A Manger." Recording with such an all-star line-up was a once-in-a-lifetime moment, she says.

"It's very crazy, and actually overwhelming to think about it," she admits. "These are people that just two years ago, we were fans of. Take Luke, for instance. I remember my dad telling me that they were friends, and I was starstruck. Now, to be singing with him on an album is something that I never thought would have happened."

When asked about holiday traditions in their family, Sadie said that food definitely is one that they take a great deal of pride in. "Every Christmas, we eat at Mamaw Kay's house, and Papaw Phil and Mamaw Kay cook. But, since we eat together all the time, we have a seafood dinner for Christmas. He always cooks Crawfish Pie. I guess it's more of a Louisiana feast for Christmas dinner. Each of us draws a name, and we have to buy a present for them, and we open them up. The show does not give Mamaw Kay enough credit for how funny she is. Every Christmas, she buys some hilarious presents for the men of the family. She has a story behind each present she gets. She cracks us up."

Read the entire article at Bilboard.com