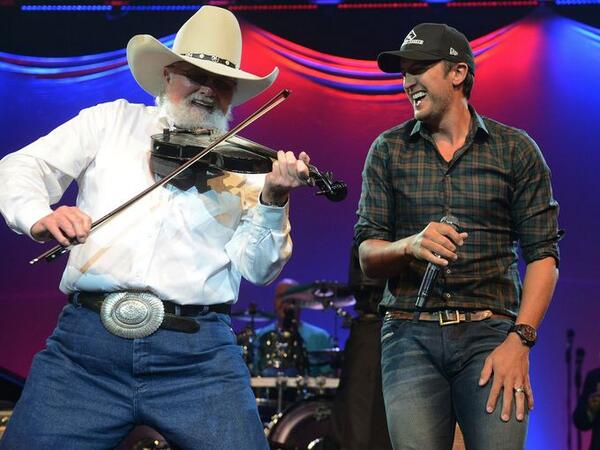 Performances by the Charlie Daniels Band along with Clint Black, Kellie Pickler, The Grascals, the U.S. Navy Band Sea Chanters and the American Hitmen were part of the program to celebrate military veterans and raise funds and bring greater awareness of the national Veterans Yellow Ribbon education program and to raise awareness of and funds for veterans scholarships at Lipscomb University. Members of the military and their families were guests of the events corporate sponsors. Proceeds from the event benefitted Lipscomb University’s Charlie Daniels Scholarship for Heroes Fund.

To the delight of attendees, two additional artists made appearances. Lee Greenwood took the stage early in the evening with a performance of his anthem-hit, “God Bless the USA.” Reeling from the all-star performances, the crowd erupted as ACM “Entertainer of the Year” Luke Bryan took the stage.

"The sacrifices these veterans and their families have made help keep our country free," stated Bryan. "We should take care of them in whatever ways that we can, and that includes a good college education."

The event, sponsored by Copperweld, Humana, Grand Avenue, Twice Daily, Clear Channel, Shofner Vision Center, Lipscomb, Glover Group Entertainment, and produced by David Corlew & Associates was streamed live worldwide by Blue Scout Media and will also be broadcast to all US military bases in coming weeks by the Pentagon Channel and Armed Forces TV. To view the show or for further information, please visit:stagehop.com.

“This show just gets bigger every year as the Nashville community continues to show how much they love and support our military,” beamed Daniels.

Daniels launched the event in March 2010. Each year, up to ten veteran students receive the Charlie Daniels Scholarship for Heroes, which benefits veterans who do not qualify for Lipscomb’s Yellow Ribbon Enhancement Program that offers eligible Post-9/11 GI Bill veterans and their family members an undergraduate degree tuition-free or a graduate degree either tuition-free or at a greatly reduced tuition rate.

“It’s an honor to be part of something special like the Charlie Daniels’ Scholarship for Heroes event,” Clint Black stated. “As if it weren’t enough that Charlie Daniels asked me to sing—our troops occupy a very special place in our history. We have to do our utmost to make sure the part we play in their history is worthy of their sacrifice and commitment. This event is playing a fantastic role, making higher education a reality for returning veterans. I’m thrilled to be a part of this special evening.”

Some of country music’s biggest names helped Daniels raise awareness through this event. Clint Black, has had 22 No.1 singles on the Billboard country charts. Black River Entertainment artist and “Dancing with the Stars” champion Kellie Pickler released her fourth album,'The Woman I Am', last year. Grammy-nominated group, The Grascals, have become one of the most acclaimed bands on today’s bluegrass scene for their innovative mingling of bluegrass and country music. The Navy Band Sea Chanters is the United States Navy’s official chorus. The American Hitmen, Marines and brothers Dan and Tim Cord, formed in the midst of battle in Fallujah, Iraq, and have recently been featured on “America’s Got Talent.” Today, the band also includes former Marine Dan Jarmon, bass guitar, and drummer Phil Snyder.