Kip Moore Set To Headline CMT On Tour 2014: Up In Smoke 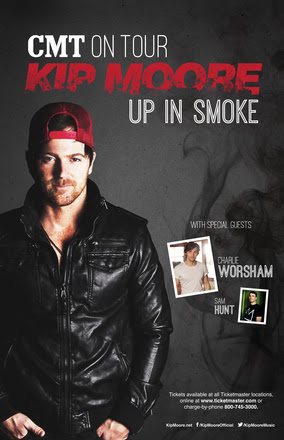 PLATINUM-selling singer/songwriter Kip Moore will headline the CMT ON TOUR 2014: UP IN SMOKE this fall. The tour will kick off on Sept. 25 in New York, NY and will hit over 20 cities through November. Moore has tapped newcomers Charlie Worsham and Sam Hunt to come along for the ride. Tickets go on sale this Fri., June 6. For a full list of dates and more information, visit: http://www.cmt.com/music/cmt-on-tour/2014/.

"We've been on the road pretty much non-stop for the past four years playing as much as we can wherever we can," said Moore. "When we started out sometimes there would only be five people at a show, and seeing the crowds grow over the years is really humbling and encouraging. And now to be teaming up with CMT for a tour is a really exciting moment in my career. We'll definitely be playing lots of songs from the new album out on the road so it will be fun to test those out and see what the fans think."

“Kip’s UP ALL NIGHT album swept us away with an edge and swagger that put him in a class of his own, coupled with three back-to-back No. one singles,” said Leslie Fram, SVP of Music Strategy, CMT. “The rest of the story is happening now and we’re proud to have him headline our 13th annual CMT On Tour, along with CMT Listen Up artist Charlie Worsham and hot newcomer Sam Hunt.”

Moore performed his new single "Dirt Road" for the first time on television last night on Late Night With Seth Meyers. From there, he heads full force into CMA Music Festival week with a special performance outside Bridgestone Arena for fans to kick off the CMT Music Awards Red Carpet pre-show Wednesday night and will present later during the live awards telecast.

The Washington Post calls Moore "one of Nashville's breakout stars…" while his album UP ALL NIGHT was the best selling debut album from any solo male country artist released in 2012 and 2013, and produced three back-to-back No. one singles with the PLATINUM-selling "Somethin' 'Bout A Truck," "Beer Money" and "Hey Pretty Girl." His current single, "Dirt Road," is from his upcoming sophomore album due out on MCA Nashville. For the latest updates, visit www.kipmoore.net.

Sam Hunt is quickly becoming one of Nashville's most talked about young talents. With a string of songwriting hits under his belt already, including Kenny Chesney’s No. one single “Come Over” and Keith Urban's smash hit "Cop Car." As one of Rolling Stone’s “Ten Artists You Need to Know," Hunt's first commercial radio single “Leave The Night On” launches nationwide mid-June. For more information, visit www.samhunt.com.