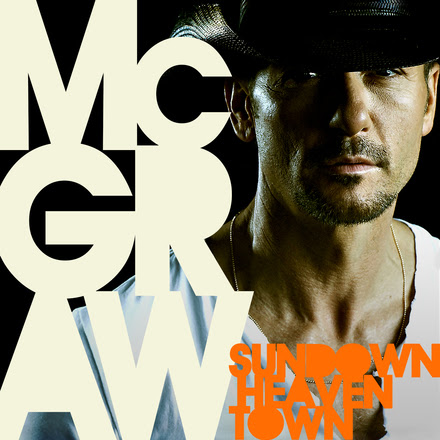 With USA Today already affirming that the album, “continues McGraw’s winning streak,” release day will kick off at sunrise with a performance on Good Morning America (9/16). Later that night, McGraw will team up with award-winning director Bennett Miller (Moneyball, Capote) for the music series American Express Unstaged at Hammerstein Ballroom. The concert will be live streamed at amexunstaged.com at 9PM ET. The next day, he'll head to The View (9/17) followed by a performance on The Tonight Show Starring Jimmy Fallon that same day. McGraw will round out the week at the SiriusXM studios as part of a special edition of SiriusXM’s “Town Hall” series (9/18).

From start to finish, SUNDOWN HEAVEN TOWN tips its hat to the traditions of country music, then tosses some new ingredients into the mix while "balancing authentic country atmosphere with pop polish" (Boston Globe). The result is a melting pot of everything Tim McGraw does best. It's a country album for 2014, anchored by a fondness for the genre and the desire to push it into uncharted territory. Co-produced by McGraw and Byron Gallimore, with whom he has collaborated on all twelve of his previous multi-platinum chart topping albums, SUNDOWN HEAVEN TOWN marks his thirteenth career studio album and second on Big Machine Records.

To help bring the celebration coast to coast, McGraw will be providing Southwest Airlines® passengers FREE WIFI on all evening flights to Los Angeles, CA on Sept. 16. Starting tomorrow, fans can enter to win a VIP trip for two to meet McGraw and see him perform at a private event in Los Angeles at www.southwest.com/sundownheaventown.

The three time GRAMMY award-winning entertainer has accumulated 35 No. one's, 54 Top 10 hits, sold over 40 million albums, 14 CMA's, 15 ACM's, 10 AMA's and countless other honors. He is currently up for two CMA Awards including "Single of the Year" and "Musical Event of the Year" for "Meanwhile Back At Mama's" (featuring Faith Hill). His current single, "Shotgun Rider" is impacting radio now.