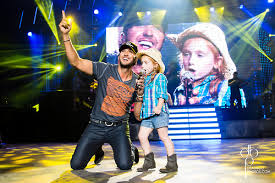 Country superstar Luke Bryan had a special guest recently during his performance of "Someone Else Calling You Baby" at a show on his "Dirt Road Diaries" tour.  As he began to sing, six year old Kylee caught his eye and he picked her up and brought her on stage with him to perform for the crowd of 15,000.  And... she did not disappoint.  She knew every word of the song and there were definitely no signs of stage fright.  According to local radio station 103.7, Kylee "kept up with every lyric of the song when Bryan . . . gave her the microphone."

"Y'all give it up for Kylee!" Bryan said before asking her, "Can I sign you to a record deal tonight? Are you cool with that?" "Yeah!" she quickly responded.

Who knows, we may see her on the big stage again one day as the heaadliner?